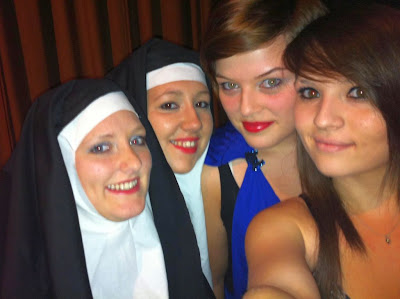 
How did a redundant tractor shed attract a talented company of younsters to spend their summer nights preparing a very enjoyable, and highly professional, variety show of songs [and dances] from the musical stage ?
Well, that's a story for another day. Suffice it to say that Show Hits 2011 was a fast-paced, slick sequence which never lost energy or style.
It began with a generous helping of Sister Act, with a very lively Deloris, and some impressive chorus work.
And ended with the Queen fans' juke-box musical, We Will Rock You, with familiar numbers [though not alas Bohemian Rhapsody] belted out with enthusiasm and a great rock backing.
In between we had two lovingly revived “Gerald Wiley” monologues off the box, a very stylish title number from Cabaret, and the Waltz duet from Sweeney Todd, which honesty compels me to say was the only performance where all the words were audible. Not to mention brief encounters with Rent, Wicked, Legally Blonde and Glee, and a commendably simple sequence from Glee: the a cappella ending to Say A Little Prayer was a musical highlight.
The sixteen-piece orchestra – the envy of many a West End pit these days, and maybe a tad over-powered for this acoustic and these vocal forces – was directed by the prodigiously talented Kris Rawlinson, who also managed to appear in two numbers, including Shrek in a green mask of his own making …
The younger performers – some cute Cockney tots here – got a chance to shine in a medley from Chitty Chitty Bang Bang, which featured a brilliant knees-up number [Ol' Bamboo] and the car itself, magnificently recreated by Frank Burgess. We're promised a period cab for Pygmalion, LADS' next show...
Show Hits 2011 was directed by Cathy Hallam, with Mandi Tickner, and choreography by Vicki Bird.
on Friday, September 02, 2011