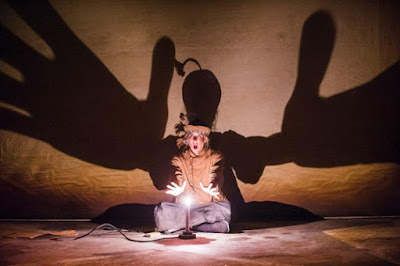 THE FIREWORK-MAKER'S DAUGHTER
Royal Opera at the Linbury Studio

Philip Pullman's charming tale is set in a non-specific Orient. A fairy story of elephants, mountains and fireworks. Like all the best stories, it has something to say to everyone; the young children and the adults in the audience equally enchanted.
The novella, now 30 years old, has also been a successful play, and now it is a proper opera, with music by David Bruce and a libretto by Glyn Maxwell.
John Fulljames's colourful production is deliberately, delightfully simple – shadow puppets [by Indefinite Articles] on all sorts of screens, OHP projections, and some stunning costumes. All to relate the adventures of feisty proto-feminist Lila – the girl who never gives up. She's desperate to follow in the firework-making footsteps of her ageing father Lalchand. He's unwilling to pass on skills and trade secrets, so Lila embarks on a quest to find the fire-fiend. She's joined by her friend Chulak, by Hamlet the white elephant, and by the optimistic, kind-hearted pirate Rambashi.
In the end, of course, father and daughter are reconciled, Hamlet finds his long lost love Frangipani, and Lalchand's fireworks win the day.
Bruce's fine, bright score – infused by eastern influences - gives many opportunities to the young singers, accompanied by CHROMA with Alice Farnham conducting. Lalchand – sung when I saw the show by Nicholas Merryweather – has a lovely aria to his daughter. Most of the lyrical lines are given to Lila herself – the excellent Lauren Fagan [seen this year in Orpheus by candlelight] – and to the elephant, beautifully done by American counter-tenor Tai Oney. Peter Kirk brings a cheeky charm to the elephant boy Chulak, and Ross Ramgobin is the audience favourite as Rambashi, not to mention the King, complete with stilts, fingernails and the flashiest frock in the show.
The evening is crammed with inventive inspiration, starting with the Linbury foyer, with fly-away powder, Firework cupcakes and rockets in the ceiling. The Echoes on Cruel Mountain, Hamlet's billboard bottom, and the firework competition at the end, with Herr Puffenflasch using sand, Signor Scorcini oil, to finger-paint the pyrotechnics before our eyes.

It all feels refreshingly hand-made. A taste of the lyric stage for the ROH's youngest opera-goers, and a timely reminder that magic can be made without microphones or electronics of any kind.
on Thursday, December 31, 2015