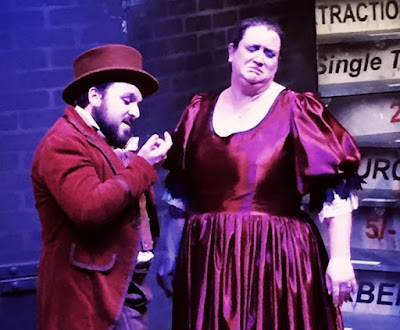 Sondheim's Sweeney ? At the Old Court ? Mine certainly not the only eyebrow raised when the listing appeared.
But the production – CTW's first full musical for many a year – has proved a resounding success both financially and artistically.
Catherine Bailey's take on the show is necessarily spare and intimate. Exactly the way Christopher Bond's drama was done when it first caught Sondheim's eye. We enter past the harmonium and the man-size meat grinder waiting in the wings. The set – built in the auditorium to accommodate the notorious salon above the pie shop – is a grim Dickensian façade, with ghostly dustsheets above. The action begins with a sombre procession, before Toby draws us in to the story.
A damaged child, huddled in a strait-jacket. Tobias Ragg is often a young boy in the melodrama, much less often in the musical, since for him, as for all the principals, the writing is a real challenge. Charlie Borg makes an excellent job of it – comedy and tragedy alike: his last appearance, hollow-eyed and grey-haired, sets the tone for the emotional finale.
No surprise to see the excellent David Slater nail the title role, a riveting performance which makes the character human in his deranged passion, and effortlessly navigates Sondheim's melodic lines. But a revelation to hear CTW regulars revealed as fine vocalists: Dave Hawkes as the “abominable judge”, Chris Edwards as the revolting Beadle. And Debbie Miles as a memorable Mrs Lovett, holding her own with Slater in the duets, with excellent comic timing as well as hidden depths in, say, Nothing's Going To Harm You. By The Sea is superb, with a grumpy Todd and a fetching pair of bathing belles.
Tom Tull's fine voice as Antony, blends operatically with Jade Flack's tragic Johanna. No operatic fireworks from Harry Sabbarton's Pirelli, alas, but a sprechgesang approach which works surprisingly well.
The chorus copes superbly with the challenges of the score – good to see figures slumped at the end of the alley, and the constant presence of the heap of rags concealing Marie McNulty's beggarwoman. Though more sensitive, oblique lighting might help her melt into the shadows. The uplighting for the barber shop is very effective, however.
I've seen many Sweeneys but the powerful intimacy of this version is something special. And, at the end, after the bloodbath and the curtain call, the Stage Manager rushes on to wipe the gore from the Fleet Street floor lest the Demon Barber claim another victim ...
on Thursday, December 17, 2015

Sondheim is no walk in the park.. Huge thanks to Catherine Bailey for switching us to the front row.. the production was already powerful but experiencing the prologue with the chorus almost literally on your toes was so immersive it truly takes your breath away..especially when they reach full volume on "Swing your razor high, Sweeney" ..spine-tingling enough when I saw it in rehearsal ... Harry turned to me at the end of the prologue and said "that was BRIILLIANT". The production is so full of gripping moments... Sweeney seductively caressing his razors as it kicks into "Friends" ... the sheer power of "Epiphany" as Sweeney vents his anger and swears vengeance on mankind awesomely performed by David Slater ... Many highlights ..young Charlie Borg's excellent Tobias ...mastering Sondheim tunes at such a young age and exuding such confidence... Marie McNulty's beggar woman , literally at our feet throughout the whole of the production and acting her socks off throughout.. Debbie Miles's utterly desperate and tearful "I love you" to Todd seconds before being whisked into the oven... the spurting blood... a massive thank you and well done to you all from me and my folks... their parting words to me "the theatrical highlight of our year" ... We love this musical and you all stepped up to the mark, nailed those bloody tunes and created something truly special.. But lastly, a humungous well done and congrats to the master [well mistress] behind it all, "one hell of a producer"..we don't wear hats but literally raising them now to the awesome Catherine Bailey ...