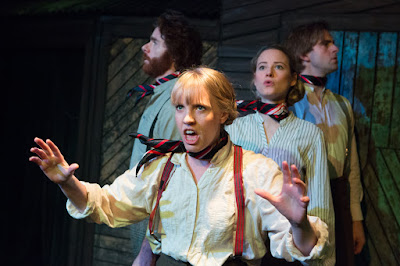 Shanty Theatre Company shares many of the ideals of Eastern Angles. So it makes sense to do as many others have done, to share a production. And what better subject than the culture clash between the West Country and East Anglian invaders ...
Fresh faces and new ideas for Ipswich. But this first partnership does not quite hit it off, despite an interesting historical background and some very clever notions. There are token attempts to interact with the Christmas show's loyal audience in the Sir John Mills, but not everyone manages a real rapport, and the tricky acoustic means that some of the words, and the lyrics, are lost.
The improbable plot is based in fact. The Newlyn fishing riots of 1896 saw “Yorkies” from Lowestoft steal an unfair advantage by fishing Cornish waters on the Sabbath.
The excellent company of five work hard to bring all the characters to life, directed by Tim Bell. Writer Harry Long has the lion's share of laughs as Norman the Chosen One, not, as he admits, the sharpest spanner in the works, who ends up leading both the mighty armies in the battle of Newlyn. Christian Edwards is Brassy Balls, the wicked boss of the fleet; Daniel Copeland the Harbour Master and the local Methodist minister. Mabel Clements is the sweet young local girl Kerra, Louise Callaghan a feisty Mags. Everyone, though, plays more than one part, and we're grateful for the names beautifully incorporated into their costumes.
Verity Quinn's design uses the space well – three entrances, ingenious storage, sixteen suspended oil lamps and bits and pieces flown in in the traditional way.
The style is often surreal, and relentlessly meta-theatrical. Subtext, allegory, soliloquy are all knowingly referenced. Some of the silliness works well: the three bearded harbour masters, the excruciating stage wait, the dual control room with a window for each side. And, in a rare concession to Christmas, there's a welcome appearance from Bella the Cow. Stu McLoughlin's music, though cleverly conceived, often feels like a distraction – boy band, Police tribute ensemble pieces are polished, but add little to the plot. But I enjoyed Norman's Les Mis “What Should I Do” moment.
The tone shifts from far-fetched flights of fancy to genuine tenderness, whereas infectious fun might fit the bill better, in this slot, in this space. And I know it's not a documentary – Norman thinks Wesleyanism is a type of cheese – but even in non-conformist Cornwall I'd be surprised to find a crucifix in chapel, or even a vicar …