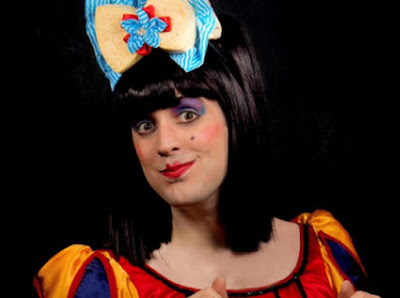 It's not every panto that opens Act Two with a funeral. But that's typical of the alternative take on the genre offered by Charles Court Opera. This is their ninth “boutique pantomime”, decamped for the first time to the King's Head.
John Savournin's script has plenty of weird and wonderful twists – Snow White is the widow of the late great Barry – who flies in for a guest appearance. And following a “cease and desist” from the Disney Corp the dwarfs are carefully re-christened: Gleeful, Crabby and poor old hippy Half Baked, blown to bits just before the interval.
But there's plenty of traditional festive fun – familiar jokes [tainted money, full frontal lobotomy, we were so poor, a warm hand on your entrance …] and even a bake-off food fight escalating from mini buns to cream pies. An eclectic clutch of songs, too, the lyrics re-worked by Savournin's co-writer and MD David Eaton. Reach For The Stars, A Natural Woman and of course Man In The Mirror. Plus a brilliant One Day More mash-up. Since this is an opera company, we're treated to marvellous unplugged voices, too.
Andrea Tweedale opens the show – after a snatch of prog-rock Polovtsian – as the Wicked Queen, Matthew Kellett plays all of the little people, Nichola Jolley is Harry, the valet turned frog footman, Amy J Payne makes a superb Larry, the Black Prince of Pretzel in a prominent purple cod-piece and Savournin himself plays a wonderful dame Snow White, squeezed like Alice into the bijou dwarf house [William Fricker's delightful design]. Their cross-dressed Aretha Franklin duet one of many priceless highlights.
The script is sparing with the topical/local references, though we do get the Garden Bridge, and a couple of Frozen gags. The space is ingeniously used, with the vast mirror concealing the dwarf kitchen and the forest, and the furry critters of the chorus popping up from windowsill and suitcase.


As usual, a brilliant blend of the familiar and the fantastic, “shimmering and glimmering” at the King's Head well into the New Year.
on Thursday, December 10, 2015