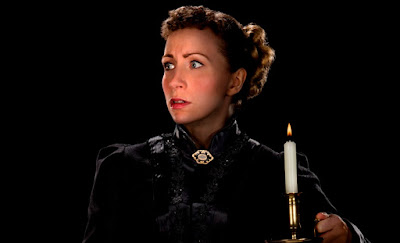 Three seasonal stories, all set upon Christmas Eve. Told by Rebecca Vaughan, severely dressed like a Victorian governess, in the customary setting of club armchair and candelabra.
Vaughan herself provides an atmospheric prologue and epilogue, evoking those ghosts of Christmases past, haunting the darkness and the silence of a winter's night; a candle is snuffed out as each story ends.
The first is Bone to His Bone, by E G Swain. In which a clergyman, plagued by insomnia, is prompted by a quarto Compleat Gard'ner to venture into the vicarage garden.
Then The Phantom Coach by Amelia Edwards [Vaughan's Female Gothic chilled us at this same address a couple of years ago]. A traveller, stranded on snow-covered moors, meets an old man with a lantern, and his reclusive polymath master, before taking the lonely road to head off the night mail.
A hot December, but no less chilling in E F Benson's The Step, set in colonial Alexandria. Heartless Jack Cresswell is pursued by his guilty fears, seeking sanctuary at last among the cowled Brothers of Poverty.
All beautifully acted, without undue histrionics but with credible characterizations and a myriad subtle movements and gestures, directed by Elton Townend Jones. The mood is considerably enhanced by lighting – candle, firelight, moonlit garden – and Danny Bright's sound design.
on Wednesday, December 16, 2015

We saw this last night and loved it, what a talented performance by Rebecca. Hope to see more productions by this company.