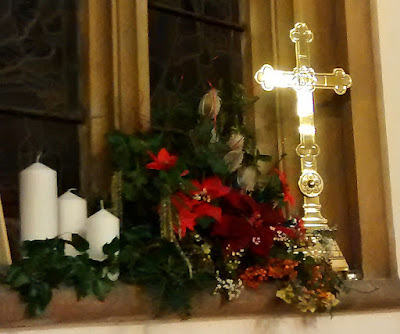 CHRISTMAS AT BLACKMORE
Stondon Singers
at the Priory Church of
St Laurence
22.12.15

Full house this year for the Stondon Singers' traditional concert of carols and Christmas music. As usual, a bracing mix of old and new, the familiar and the discoveries, conducted and introduced by Christopher Tinker.
New to me was Jacob Handl, 16th century Slovene, whose Mirabile Mysterium was a challenging combination of the archaic and the modern. The evening ended with a favourite of mine since school days, Peter Cornelius's The Three Kings, sung from the west end of this ancient church.
A première: Alan Bullard's attractive setting of Shepherds Guarding Your Flocks, followed by Berlioz' Shepherds' Farewell. Two twentieth century pieces, beautiful in their simplicity, Rutter's Candlelit Carol and Britten's Hymn To The Virgin, with English and Latin alternating antiphonally.
Mark Ellis was the soloist in Vaughan Williams' Fantasia on Christmas Carols, splendidly performed, with Michael Frith at the organ. It concludes with an old version of a well-known carol from Somerset – let the last verse stand as season's greetings to you all:

God bless the ruler of this house,
And long on may he reign,
Many happy Christmases
He live to see again!
God bless our generation,
Who live both far and near,
And we wish them a happy, a happy New Year.
on Wednesday, December 23, 2015