AMAHL AND THE NIGHT VISITORS 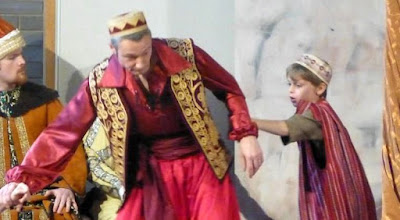 AMAHL AND THE NIGHT VISITORS
Trinity Methodist Music and Drama
06.12.15

A festive treat from Trinity this year: Menotti's children's opera staged as a curtain-raiser to the traditional carol concert.
A suitably simple production, directed by Tony Brett with Felicity Wright the Musical Director. Chorister Elliott Harding-Smith sang, danced and acted pleasingly in the key role of the crippled child who accompanies the Kings as they follow the star; Isabella Gage and Benjamin Lewis both excel as Amahl's Mother and Melchior. The Child We Seek quartet was especially moving, as was the Mother's aria Do They Know. Mick Wilson was the hard of hearing Kaspar, Jeff Green the bass Balthazar. Ed Carter made the most of the unnamed Page to the Magi. Fine support from the Shepherdesses – movement and music combining perfectly in the offerings sequence – augmented by the offstage choir. And, right at the end, a very civilized camel for the journey to the stable.
All accompanied by Christopher Wood's piano, with Gillian and David Miles on oboe and bassoon for Amahl's all-important pipe.
After the mince pies, a varied programme of Christmas choral works, with Danielle Harding-Smith at the piano and Keith Byatt at the organ. Rise Up, Shepherds, with its infectious rhythm and catchy tune, a Russian Ave Maria and, new to me, Frederick Silver's take on the Twelve Days, in case you wondered what became of all those unsolicited gifts: “with a single cartridge, I shot that blasted partridge ...”. Two helpings of Rutter, and a chance to join in with Sullivan and Goss, with glorious descants by David Willcocks.

Email ThisBlogThis!Share to TwitterShare to FacebookShare to Pinterest
Labels: AMAHL AND THE NIGHT VISITORS, TRINITY METHODIST MUSIC AND DRAMA