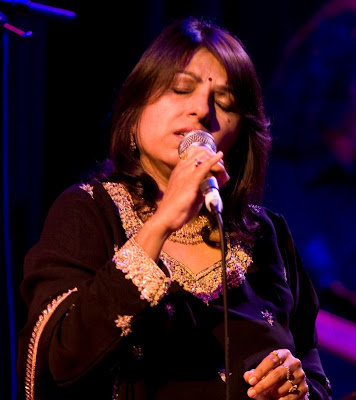 A PASSAGE TO INDIA – DESTINY CHAKRA
Swati Natekar in the Cramphorn Theatre
06.11.09
Forster's Novel has a British girl in search of the “real” India. Swati Natekar's journey takes us from her classical roots in the sleepy central Indian town of Jabalpur through Bollywood to the London-based fusion scene in which she is so prominent now.
We began firmly in the Indian classical tradition, with the evocative, plaintive sound of the sarangi, the lute of a thousand colours, played here by Sandeep Mishtra, uncannily echoing the timbre of the human voice. Then the more romantic light classical repertoire, and a toe-tapping old movie from Bollywood.
After the interval she was joined by western musicians, including Mike Leigh's acoustic guitar, for some inspired cultural cross-fertilization. Taalis, on an impressive drum kit, had some dynamic dialogues with Alpesh Moharir's tabla.
I was impressed by Mystery, from her latest album, also called Destiny Chakra, which reveals diverse musical influences, not only Indian classical music but spiritual, Rhythm and Blues and jazz.
Two guest stars made a huge impact: Kartik Raghunathan, whose The Way We Feel was infectiously energetic, though firmly in the western tradition, despite the tabla, and Soul diva Sanchita Farruque, whose cheerful enthusiasm put even Swati's stylish singing in the shade.
on Saturday, November 07, 2009