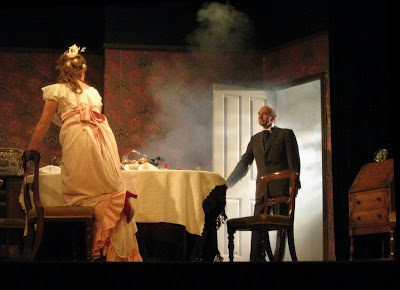 An Inspector Calls
Little Baddow Drama
19th November 2009
Jim Hutchon was at the Memorial Hall ...
Director Ken Rolf staged this as an unashamedly, dead-pan melodrama, complete with dramatic lighting and sombre, film-like music. Set in an over-stuffed Edwardian dining room peopled by over-stuffed Edwardians, the play concerns a police inspector who shatters the smug complacency of a family celebration by revealing the complicity of the family members in the downfall and suicide of a young mill-girl.
Michael Gray played the bluff, northern patriarch with characteristic pompous energy and barely suppressed outrage, conscious of the danger of a public scandal to his knighthood aspirations. Vicky Tropman was very convincing as his snooty wife, too thick to understand her complicity in the matter. From a slowish start, the two youngsters in the family, Sarah Trippett-Jones and Iain Miller went on to steal the show. She completed a beautifully judged conversion from air-head to a prescient young lady, while he, as the rake about town who finally did for the mill-girl, actually managed to look sick at the realisation.
John Peregrine’s enigmatic inspector was full of insights and accusations in a bravura performance that held the audience’s attention throughout, and Kenton Church played the daughter’s fiancé with great panache as he forensically revealed the possibility of a hoax in the inspector’s visit.
Though Priestley’s language and mannerisms are 100 years old, and the play is crammed with clichés, the director imparted an interesting freshness to the production which made for a thoroughly absorbing evening’s theatre.
on Sunday, November 22, 2009

Of course, for me the Stephen Daldry National Theatre production is the absolute benchmark and amateurs simply do not have the technical
possibilities that this NT 'version' has. However, LBD made a good stab at it .. and the Saturday night audience seemed to appreciate it. Had it been me in charge I might have upped the pace .. majority of the cast kept the pot boiling nicely, but one or two would have benefited from the proverbial "boot up the behind" ... almost wanted to shout out 'get on with it' (but didn't). On the plus side the set looked great
and the lighting and the use of Vaughan Williams' London Symphony as 'incidental' music were excellent !