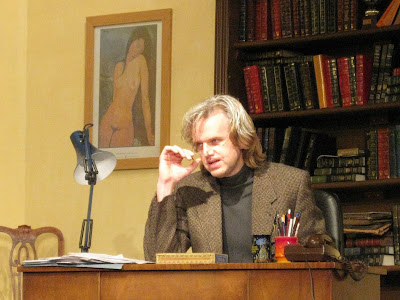 Greville Players at the Barn Theatre

Celebrating their half-century, the Greville Players continue a much older tradition in the old tithe barn, which once saw Wells, Shaw and Terry on its boards.

This pacy production brought out all the humour and pathos of the strange chemistry between the jaded lecturer, surviving on Scotch, and the gobby hairdresser with a hungry mind, determined to change her life through English Literature. 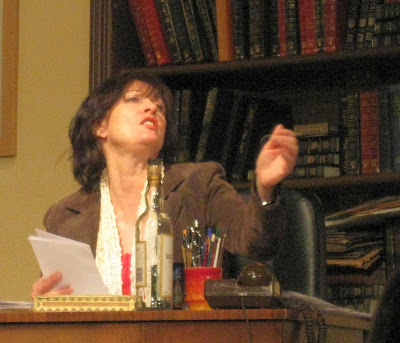 From the moment she scurried through the auditorium in search of the door to Frank's office and a new beginning, it was clear that this would be a definitive performance from Carol Parradine as the OU student caught between two cultures. Voice, accent, demeanour were all absolutely right for the part – a joy to watch. And she neatly mapped the transformation over the play's many scenes, till she is behind the desk, calling the shots, a success to eclipse Frank's failure.

Adam Thompson's Frank was a lost soul, enthusiastic but unfocused, a reluctant Pygmalion to Rita's latter-day Eliza. I liked the way he became increasingly desperate as his facile teaching techniques were revealed as inadequate faced with a student as individual as Susan, though I imagine him as a little more lined and lived-in … His clothes were unfeasibly natty, I felt.

I liked the trim-phone on the desk; I was less convinced by Frank's certificates and his skivertex books.

This is a didactic play, revisiting themes dear to Willy Russell's heart. As Rita says when she explains her hairdresser's philosophy, change must come from within, and in this play education is the key to that change.
It is thirty years old now, and I'm not sure it updates all that well – I've said before that I'm not convinced that education is seen now as an agent for social change. And the Open University has changed almost beyond recognition over the years.

But a polished revival of an important and entertaining play. Educating Rita was produced for the Greville Players by Jan Ford, and directed by John Richardson.