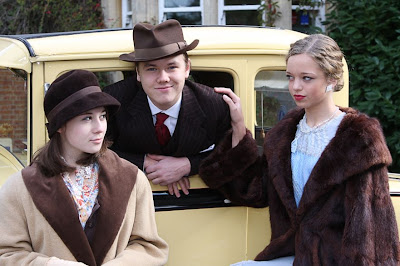 BUGSY MALONE
Young Gen in the Civic Theatre
13.11.09
The messiest show in town …
The kids in the audience loved the custard pies, and their high-tech successor the splurge gun, not to mention the soda syphon.
The kids on stage had a good time, too, with some very under-age tipplers in the Book Emporium. Fat Sam himself was played with considerable presence by Callum Crisell, and the title role by Sam Toland, slightly understated, maybe, but with loads of charm. Blousey Brown, the diamond amongst all the paste, was beautifully done by Sophie Walker – her Ordinary Fool number was the vocal highlight of the show for me.
Bart Lambert brought his special brand of sophistication to Dandy Dan, with Alice Masters as the vamp Tallulah. Like the acts auditioning for Oscar de Velt [Luke Higgins], some of the minor roles came and went so quickly that I'd no time to annotate the programme: some of the gang members were excellent in both versions of The Bad Guys Song. A name check for the cops – Henri de Lausun and Oliver Fox – for Martin Williams' Leroy, and for Elliot Elder's touching Fizzy, the dancer whose Tomorrow never comes.
After an evocative overture from Bryan Cass's band, the production began with six silk-clad chanteuses, neatly contrasted with the black frocks for the Speakeasy hoofers. More silk and feathers in Act II, leading up to the super-messy finale. No bullets, no hooch, no blood, of course, in this innocent underworld, just a Sarsaparilla racket and splurge after splurge.
It's twenty years since CYGAMS last gave us this children's Chicago. Fascinating to read in the programme just who was in that earlier show – including Jeremy Tustin, director this time around.
picture by Barrie White-Miller, Spearman Photography
on Tuesday, November 17, 2009