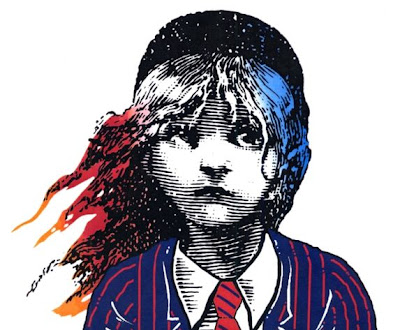 LES MISERABLES
Bossy at the Brentwood Theatre
04.11.09
Les Mis in miniature ? Victor Hugo's vast epic cries out for a big stage, but Bossy made the most of the limited space of the Brentwood Theatre, taking more than half the floor area for their ingenious in-depth set: black box, Montreuil and then finally the famous barricades.
Being so close to the performers brought its advantages [as long as the action stayed off the floor]: the words were clearly audible, and the more intimate scenes had real impact – the death of Fantine, Javert's drop and Valjean's final moments.
The score makes no allowance for immature voices; the boys especially relied on technique and characterization in their big numbers. Alexandra Phillips' Eponine had many of the evening's more memorable musical moments; Katie Lawrence, as Fantine, sang with conviction and a pleasing vocal style. The older Cosette was Laura Wood, with her younger self shared by Rosie Bloom and Georgia Chantry.
I liked Reiss Meister's Javert, with his sinister presence and cynical smile. In the demanding role of Jean Valjean, James Wilson had a very promising voice, both singing and acting, and gave us a moving Bring Him Home. And I was impressed by Sam Chapman as Marius. He has a lot to do, and sustained his character well. Empty Chairs at Empty Tables , with its “phantom shadows” was superbly done. David Gillett gave a confident double of the Bishop and Bamatabois. Master and Mistress of the House were Ollie Cross and Livvie Milne. Ollie needed to project his personality more, though his vocal performance was spot on; Livvie was wonderful in a grotesque perruque.
Among the little people, Gavroche was energetically and engagingly played by Daniel Wild, a role he shared with Tom Carswell.
David Pickthall's band was banked up stage right. The individual players could shine here too: lovely to see, and hear, the cello part so prominent.
on Saturday, November 07, 2009