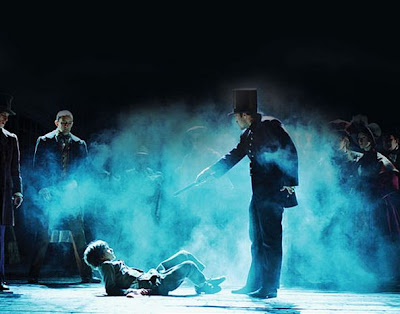 OLIVER
Theatre Royal Drury Lane
25.11.09
David Ellis was in the front stalls ...
A very slick, good looking and energetic production - very enjoyable. Tremendous energy - everything was larger and louder than life.
It was not a subtle production, and I felt that some of the characters were
a bit OTT and cartoony, particularly in the early scenes - the workhouse and funeral parlour - but less so as the show went on (or perhaps I just got used to it!). Maybe this was partly because I was sitting near the front, and the performances were designed to carry to the back of the theatre.
Also, it is probably just not a very subtle musical! But it moves along at such a pace that you get carried along.
A boo for the amplification. Although I was sitting close to the orchestra, as they struck up it was obvious that the sound was coming at me more loudly from the speakers than from the pit. Although I can understand (just) why the actors need to be miked, I'm not convinced the orchestra should be. But I suppose this is commonplace these days. The sound balance seemed wrong for
"Oom Pah Pah", one of Nancy's big numbers, in which her vocals seemed almost subordinate to the orchestra and the general hubbub of the tavern scene.
Amazing scenery, constantly in motion from above and from the wings to create London street scenes, the workhouse, tavern, and an amazing thieves' den, here portrayed as subterranean, rather than up in the rooftops as in the film version. They made full use of the height and depth of the Drury Lane stage. The actors also frequently walked or ran around a gangway between the orchestra pit and the audience, which added a bit more immediacy.
Jodie Prenger, star of the TV show, was a good but not great Nancy - don't think one would have found her memorable but for the TV connection - though she put lots of energy into it and was obviously enjoying herself. I think she was not helped by the direction. Two of her big solos - It's a Fine Life and As Long As He Needs Me - seemed a bit rushed. I felt they could have slowed the pace down a bit here, and allowed a bit more pathos to come through. The boy playing "Oliver" was good but not memorable, but the Artful
Dodger was excellent and showed a bit more personality (don't know their names, as one of three alternating casts for the childrens' parts). But the surprise hit was Omid Djalili who was an excellent Fagin. He added a lot of comedy to the part, and played up to the max the irony of a muslim actor playing a stereotypical Jewish role.
The show worked best in the big ensemble numbers - Consider Yourself and Who Will Buy - when the large cast, musicians and scenery all came together to create a really impressive effect.
on Thursday, November 26, 2009