THE MERRY WIVES OF WINDSOR – THE MUSICAL 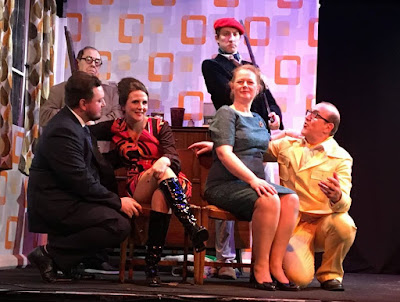 THE MERRY WIVES OF WINDSOR – THE MUSICAL
CTW at The Old Court Theatre
08.12.17
Shakespeare’s problem comedy – a star vehicle for the fat rascal - seems to cry out for music; there’s a long roster of adaptations from Salieri to Sullivan, Verdi to Vaughan Williams. And only a few years ago the RSC did a musical version, not too successfully.
Peter Jeary’s take is a very different kettle of pickle herring. A juke box musical, with songs of the sixties to provide interludes and insights into plot and character.
The idea was prompted by the Whitehall farce, a genre both apposite and ripe for parody.
It all works disgracefully well, despite some challenges in the execution. Not hard to imagine this being suggested for a professional company of actor/musicians.
CTW fields a strong cast, who generally cope well with the sometimes conflicting demands of Shakespeare and the Sixties songbook.
Stock characters, many of them, from David Johnson’s Robertson Hare vicar to Bruce Thomson’s hilarious Gallic Caius. Sarah Bell – a char with hoover and drooping ciggie – is a fine Mistress Quickly. A lovely, dense Slender – parka and Brummagem – from Alexander Bloom; the young lovers are Charlotte Norburn and James Fletcher. But it’s old lust rather than young love centre stage here, with Dave Hawkes’ lubricious Falstaff, sporting some outrageous 60s military clobber, clumsily courting the two married ladies of the title. They are excellently done by Nikita Eve and Rachel Curran. Musically secure, with a real chemistry between them, they are particularly successful in letting Shakespeare speak, and making sure the Bard gets the laughs he’s written. Their husbands are Simon Hirst, giving a nice period performance as Page, and Tom Tull as the jealous Ford, making the most of his numbers, including a powerful Delilah.
Some songs work better than others. Ring of Fire fits perfectly for the fancy-dress fairies in the forest finale, with “marvellous night for a moondance” to set the scene. An ironic Look of Love opens the second half, Presley’s Suspicion is ingeniously staged, with three smoking lovers seducing Ford’s wife behind his back. And was that Wimoweh for the wives’ “confession” in dumb-show – brilliant !
The music - all of it live - is done by Nick Mayes – who also plays Slender’s servant Peter Simple. Some issues with balance between backing and vocals, and between dialogue and songs, meant that the unplugged pieces worked rather better in the context of the play.
The costumes and the set both very evocative of the period, though the set – split by a strange black hole in the centre – finds it hard to melt into the background.
Despite some dumbing down and desperate double entendres, this is a very enjoyable take on Shakespeare, all done in two hours. By the sing-along Everlasting Love line-up the audience will include some new converts to CTW and, we hope, to Shakespearean comedy.
on Saturday, December 09, 2017

Email ThisBlogThis!Share to TwitterShare to FacebookShare to Pinterest
Labels: CTW Chelmsford Theatre Workshop, THE MERRY WIVES OF WINDSOR – THE MUSICAL, the old court