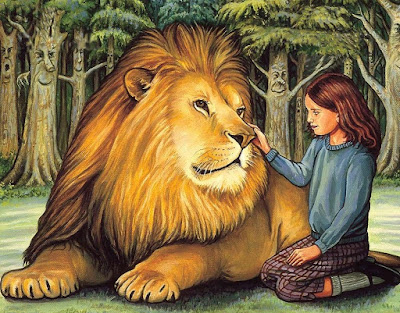 
The much-loved C S Lewis classic is not easy to bring off on stage.
This American version from the 80s, book by Jules Tasca, music by Thomas Tierney with lyrics by Ted Drachman, is a full-blown musical with some pleasant tunes for all – captures the excitement of the Pevensies’ adventure, and even manages a brief Blitz frame.
There’s magic, too, in Ray Howes' warm-hearted production, with the White Stag [Emma White, also a spirited Mrs Beaver] dancing with fairy dust for the Overture. The land of Narnia is suggested by an impressive Gothic-inspired set, though the wardrobe seems somewhat understated.
A company of eight young actors bring the characters to life with infectious enthusiasm. Connor Kelly is an excellent Edmund, completely convincing as the boy who’s seduced by the White Queen’s promise of Turkish Delight. His sisters are Elize Layton’s Lucy and Katie Lawrence’s Susan – their singing in Field of Flowers is a musical highlight. Tom Brooks doubles delightfully as the brave Peter and the bearded dwarf who drags the White Queen’s chariot around. She’s played, with a touch of the Demon King, by Lydia Shaw, beautifully attired and made up. Aslan, the Lion who heads the forces of Good, is Philip McParland, who’s also the wise professor. His characterization is not helped by his head-dress, which sits awkwardly atop his mane and his own face. Noblest in profile, it must be a disappointment for a generation raised on Cats and The Lion King. Guido Garcia Lueches is a wonderful Mr Tumnus as well as Mr Beaver.
There are plenty of musical numbers – Andy Prideaux the MD - some more appropriate than others. No problem with a jolly knees-up for the Beavers, but it seems inappropriate to trivialise torture and martyrdom with “Murder Today”.


The opening number - “Doors and Windows” - sets out some fine sentiments about what the Prof calls “the architecture of possibilities”. Not easy language, or ideas, for the audience from Margaretting Church of England Primary School. But they seemed rapt by the story, unfamiliar to many of them I’m sure, of Good driving out Evil, the children lost now found, Springtime melting Narnia’s perpetual winter and the world made right again ...