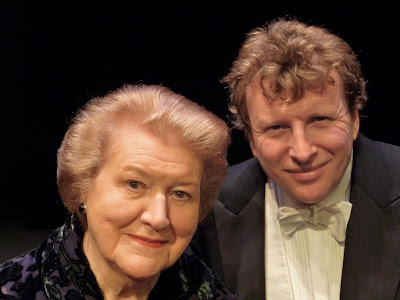 As another memorable Chichester season ends, we are reminded of the opening show – 40 Years On. Like that show, which includes a specific reference to “lunchtime concerts in the National Gallery”, this exquisite entertainment includes Chamberlain’s broadcast, and a cheiromant giving a surprising reading on the eve of war.

It’s the simplest of formats, devised back in 2009 by Nigel Hess, great-nephew of Dame Myra Hess, the concert pianist whose wartime concerts, now the stuff of legend, did so much for the morale of Londoners in the darkest days of the Blitz.

Faced with the “cultural blackout” after the declaration of war in 1939 – theatre organist Sandy McPherson the only live musical offering on the BBC - she used her contacts and her steely determination to ensure that there would be music every day in the octagonal room. The concerts lasted throughout the war; many musicians performed, all for a flat rate token fee. Hess was helped by Kenneth Clark, the National Gallery’s Director, and by countless volunteers, such as her friend Joyce Grenfell, glimpsed spreading cottage cheese “like one possessed”.

In Patricia Routledge’s compelling performance, Hess emerges as a strong woman, but modest, with a gentle sense of humour. She’s joined on the stage by Piers Lane. Seated, like Dame Myra, at a Steinway, he intersperses the recollections with some of the music those wartime audiences might have heard - Beethoven, Brahms, with a surprise crescendo to cover the whine of a doodlebug, Chopin, her trademark Jesu Joy of Man’s Desiring.

And on a screen behind the performers, a glimpse of those original audiences – a weary civil servant, eyes closed, his attaché case in the aisle beside him, and a young woman, seated on the floor, hair pinned up, cheap print frock. Was she, we wonder, one of the thousands who wandered into the Gallery by chance, to have a love of chamber music kindled that would last a lifetime ? “Never,” wrote Clark, “had people seemed so transformed by music.”
on Sunday, December 17, 2017