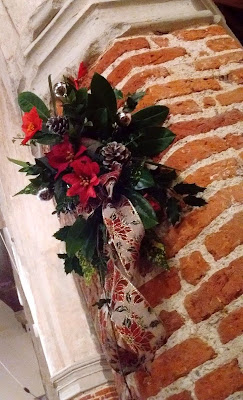 This year’s concert of carols – a cherished advent tradition for many – was a fine blend of familiar favourites and fresh discoveries.

A score of offerings, including four congregational carols. Beginning with the much-loved We Will Rock You, and ending with a setting of Tennyson by the Finnish composer Jussi Chydenius.
The central work was Cecilia McDowall’s Christmas Cantata, A Winter’s Night, a sequence of five contrasting seasonal pieces, with plenty of work for the organ, played by Michael Frith. The instrument also featured in an assertive modern arrangement of We Three Kings.
The choir produced a precise, balanced sound, with good support from the lower voices. Amongst many other festive pleasures, we enjoyed the Song of the Nuns of Chester, of which the manuscript survives from the fifteenth century – an excellent choice for this medieval church. A rare performance of Imogen Holst’s Out of Your Sleep, two charming, melodic pieces by Alan Bullard and Pierre Villette [an excellent performance of his Hymne a la Vierge] and The Truth Sent from Above for divided choir by the Singers’ conductor, Christopher Tinker. A setting moving in its simplicity, redolent of the ancient world of plainchant and the folk tradition from which the words spring.

Voices In The Mist
by Alfred, Lord Tennyson

The time draws near the birth of Christ:
The moon is hid; the night is still;
The Christmas bells from hill to hill
Answer each other in the mist.

Four voices of four hamlets round,
From far and near, on mead and moor,
Swell out and fail, as if a door
Were shut between me and the sound: