SNOW WHITE AND THE SEVEN DWARFS 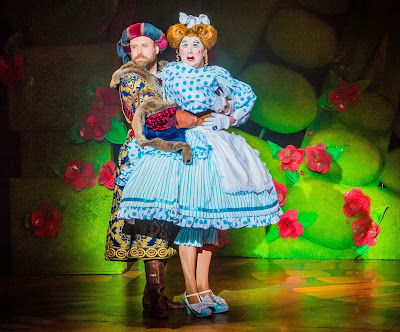 This sparkling Snow White – Daniel Buckroyd’s fourth panto for Made in Colchester – is a delightful cocktail of glamour, glitter and good old-fashioned fun.
David Shields’ designs feature giant candles, surrounding the flown title, and later the magic mirror and the Princess’s glass coffin. There’s an impressive dungeon laboratory, as well as a charming cottage for the Dwarfs, which opens out like a book as Snow White walks in. The pyrotechnics are safely in the ceiling, and there’s a stunning mirror-ball above our heads.
We begin traditionally, with a stand-off between Good and Evil, familiar banter from Fairy Blossom and wannabe Maleficent, the tamely named Enchantress. Both, incidentally, excellent singers, more than capable of selling their big numbers to a noisy opening night crowd.
Then a wordless waltz behind the gauze - “the artistic bit”, as Nurse Nellie has it; she makes a low-key appearance (how hard must that be!) in this scene-setting backstory.
Antony Stuart-Hicks – his third time out on the Mercury stage – is the Dame - “back to lower the tone”. A masterclass in this unique genre, much harder to nail than many people think. He takes the audience by the scruff of the neck, with quick-fire gags of varying degrees of smut, and astounding audience skills. A late-comer, quite far back in the stalls, is the target for some acid remarks, before Nellie charges up to him, inspects his hands, berates his lateness, and in a priceless pay-off discovers he’s a police officer. And doesn’t forget ...
Other Colchester favourites are back, too: Simon Pontin is promoted to Chamberlain this year; Dale Superville is Muddles, another perfect panto personality. A beautifully youthful Snow White, spirited and excellently sung, from Megan Bancroft. Her “true love” who wakes her with his kiss, is the bookish young Rupert, Alex Green. The ageing king, bewitched by the wicked queen and trapped in the mirror, is James Dinsmore.
The good fairy is a cuddly, bubbly Gbemisola Ikumelo, more than a match for the Enchantress of Carli Norris. This is a remarkable performance, her dialogue peppered with hashtags, managing the evil as well as the vocals and the comedy (a nice bit of business with the apples). She looks stunning too – the devil has all the best gowns here. At the end, of course, she sees the error of her ways, when the frog is snogged and everyone is Walking on Sunshine.
Although the script does not shy away from the darker elements of the Grimm story – the poison, the deer’s heart, the tomb - most of the traditional tropes are in place: A Ghost Routine in the Spooky Wood – no mere king-size sheet here, but a splendidly costumed spectre – a classic mirror number, complete with vibraphone underscore, an audience song (Wiggly Woo, in case you want to practise beforehand) and a shout-out for Lorna the birthday girl and the Rainbows and Brownies packing the front stalls. And scarcely any topical gags – Adele and Theresa May the only victims.
Richard Reeday leads a band of three in the pit, with a nicely eclectic playlist, from Positive Thinking – a great duet that could have come from any panto over the last forty years – to Bieber’s Puerto Rican hit from earlier this year. The Disney songs – now 80 years young - are strictly off limits, of course, though the Dwarfs sail pretty close with the Spanish Jai Ho, and an ingenious reworking of a Jeff Beck hit from the 60s, Hi Ho Silver Mining. There’s even a cheeky Hi Ho at the end of the Wizzard festive encore.
And what of the Dwarfs ?  Not the junior chorus (these talented Apples and Pears, nicely choreographed by Charlie Morgan do the cute woodland creatures and general ensemble) but new and original characters – the Captain, a Scotsman, a French chef, Windy, the last to arrive … done as puppets by Abigail Bing, voiced and moved by members of the cast. Though panto lighting (Mark Dymock) is not perhaps best suited to puppetry, this is a refreshingly original touch in an otherwise traditional treatment.

Email ThisBlogThis!Share to TwitterShare to FacebookShare to Pinterest
Labels: colchester mercury, made in colchester, reviews hub, SNOW WHITE AND THE SEVEN DWARFS