THE LADYKILLERS OF HUMBER DOUCY LANE 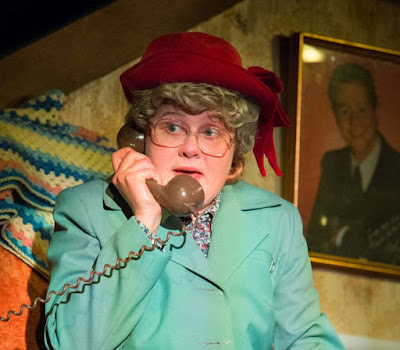 Another helping of seasonal jollity and surreal fun, this time from the pen of Harry Long. Not a spoof on the original, he insists. Perhaps an hommage.
Just as hilarious, and still recognizable, but with a very different feel, not least because the string quartet has now become a troupe of luvvies, putting on their Oscar Wilde as a front for some serious house-breaking. And, unlike their predecessors in the Ealing comedy, these jailbirds are really talented musicians.
Sean Turner’s set is one of the best we’ve seen at this address, with a staircase, and a perilously small upper floor for the little old lady’s easy chair. The upright piano doubles as the counter at the local nick, where weary coppers listen to Mrs Blaine’s imaginative accounts of wrongdoing on Ipswich’s “glorious boulevard”.
She’s wonderfully created by Emma Barclay, who thanks to some smart quick changes and a life-size cardboard alter ego, is also Cow Crusher, the brains of the gang. Todd Heppenstall is a menacing Left Eye, Alex Prescot the stage-struck Smithy – a touch of tap for his Chorus Line moment – as well as Mr Overlock, theatrical costumier. The depressing pessimist Kim, who finally finds love and a crystal chandelier, is played by Keshini Misha, and the strangely named Scar Feet – One Round in the original – is the excellent Daniel Copeland, last seen here, with Long, in Holy Mackerel.
Dominic Conway’s music includes On the Run, for the five convicts, the title number [“too charming to blame”], and a Les Miz tribute – One Job More – as they prepare for their last heist.
Veteran of the barricades Michael Ball is the subject of an often saucy running gag, Binkie’s friend Gladys makes a last minute cameo appearance on lead guitar, Michael Fish the pet penguin descends in his cage from the flies. There’s an inspired use of Lapsang Souchong, a very nice effect with vintage footlights and some stage curtains, and, as an Act Two warm-up, a chance for the capacity crowd to have their moment of fame in some innovative digital audience participation.
Not perhaps the finest “Yeasty Mangles” vintage, but in Laura Keefe’s fast-paced production, a warming feel-good tipple, enhanced of course by the traditional hot punch and mince pies in the interval.


From Gatacre Road the show travels to Woodbridge in January, and is finally re-located to Orton Brimbles for its Peterborough run.