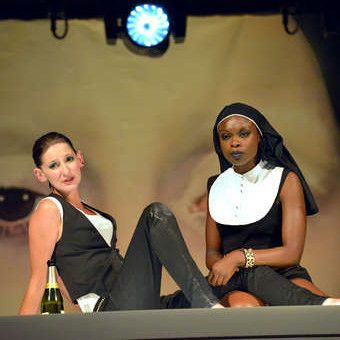 THE WHITE DEVIL
RSC at the Swan, Stratford

Whatever would Webster think ?
If he were writing now, would he be Tarantino or Orton ?

His violent revenge tragedy is dragged by director Maria Aberg into the 1970s, with disco dancing and a general air of unstylish loucheness for the “horror upon horror”.

This is part of the Roaring Girls season, so the most interesting character, Flaminio, is now female [Laura Elphinstone], somewhat overshadowing Kirsty Bushell's strong Vittoria, and generally behaving as if she were the White Devil of the title.

Good work from David Rintoul, by far the best verse speaker in a very mixed bunch, in a natty red blazer as the Cardinal.

Video, dance, pumping music, the cult of celebrity, give the show a very modern feel, somewhat at odds with the misogyny in the text, especially the reaction to adultery.


All of us who booked were sent a letter warning of the shocking immediacy consequent on the contemporary setting. Didn't come across in the event, in a confusing, ultimately unsatisfying production.
on Sunday, November 30, 2014