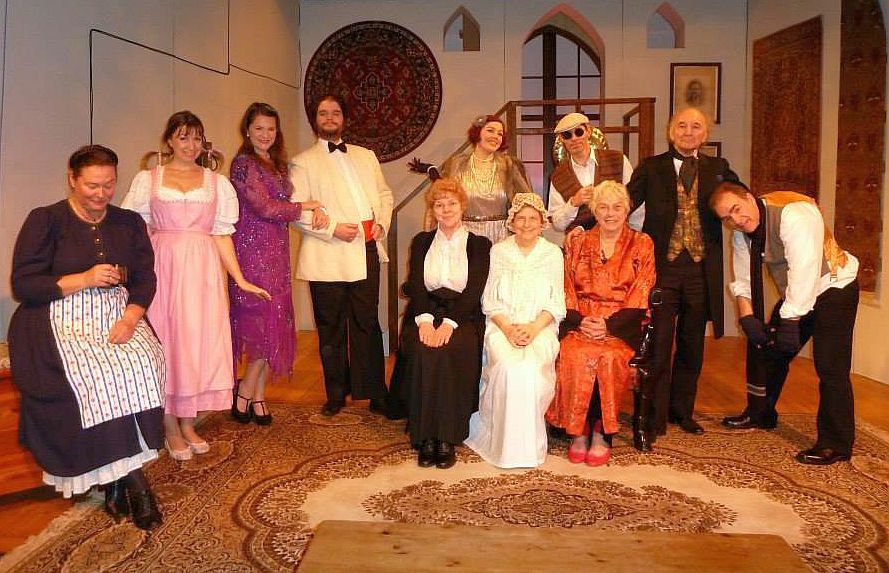 This Gothic comedy was penned back in '77 by Jack Sharkey, onetime jokes editor of Playboy.
“Dreadful is a relative term”, and his often clever spoof of the Transylvanian genre has many witty touches, and is amusingly self-referential. But it runs out of comedy steam a little towards the end, as the characters sit around listening to explanations of what's been afoot.
Director Kenton Church [who also dresses up to play the various Shtunken brothers] has assembled an excellent cast, including some stalwarts and several new faces. The range of accents is breathtaking. We're in the Carpathians, I think, but there are Americans, including the daughter of the Home Counties Baroness and her Mad Scientist spouse.
The piece really needs brazen, bold performances, and some actors achieve this better than others here. Peter White is excellent as the deformed Mord, as is Sylvia Lanz as the prim Teutonic housekeeper, knocking back tots of schnapps.
John Peregrine is the mysterious von Blitzen, with Rita Ronn as an imposing grande dame [beautifully turned out, as are many of the women characters]. The youthful US contingent is well handled by Sarah Trippett-Jones, Heather Lucas and James Oakley.
The sound effects [phonograph horns high on the castle walls] are brilliantly done in the manner of steam radio, and the set, with its tiny fenestrals affording a glimpse of figures on the stairs, magically makes this tiny stage into a cavernous baronial hall.
on Friday, November 21, 2014

Despite director Kenton Church explaining in the programme that he had discovered this comedy 20 years ago I had never heard nor seen it.
Played out on the wonderfully Gothic set with a clerestory window from the attic, it was sturdily built by Barry Weight's team on three levels – no make that four – I'd forgotten the dungeon, this spoof send-up of Frankenstein was good fun.
The central partnership was between John Peregrine's Baron Von Blitzen and his henchman Mord, the twisted hunchback complete with vocal ticks, excellently played by Peter White. Together responsible for the lurid howls coming from the basement. Meanwhile rigid, grim and floating on a sea of alcohol, housekeeper Gretchen Twitchett was played by Sylvia Lanz
But the nasty plans went awry with the unexpected arrival of his innocent, pretty daughter Daisy, played by Sarah Trippett-Jones, her dumb blonde friend Babsy (Heather Lucas) and dim but heroic boyfriend Frank Sterling brought to life by James Oakley.
Plus Rita Ronn, trailing clouds of glory and elaborate costuming, as Daisy's mother Maritza Von Blitzen estranged wife of the Baron. An imperious figure, mistress of all she surveyed.
Suddenly all the female relations of the Von Blitzen's turn up unannounced adding yet more chaos to the existing turmoil. With Gill Peregrine as Hannah Zitzen, Helen Langley as Freda Zitzen, Nicola Martland as Freda Zitzen and Sarah Bell as the runner-up Zitzen they made an astonishing array of kinship.
Then of course there was Kenton Church as Heinrich Shtunken Chief of Police and all his numerous brothers which involved a host of quick changes of costume and characterisation.
Although the whole evening was enjoyable to watch I felt that the plot rather tailed off with the extraordinarily lengthy explanations of events. The cast also needed to give the whole thing more of a kick with tongues firmly in cheek.
Maybe it's got something to do with it being hellishly difficult to direct and act at the same time!