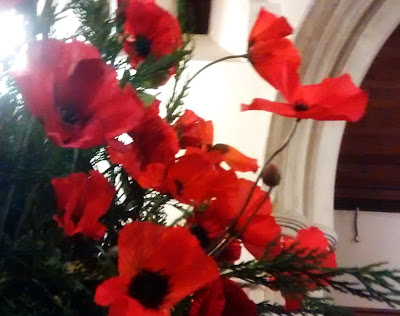 FOR THE FALLEN
Stondon Singers at St Lawrence, Blackmore
11.11.2014

Armistice Day was marked in Blackmore with this timely concert, including works from some of the best-loved choral composers now writing.
But the evening began, and ended, with Douglas Guest's In Memoriam, a short, simple setting of Binyon's familiar words of remembrance; a reading too of a poem by Julian Grenfell, who lost his life in France in 1915.
Morten Lauridsen, master of American mysticism, wrote his Lux Aeterna after the death of his mother. It is a simple, heartfelt continuum of sacred texts on the theme of light, sung with sustained emotional momentum by the Singers under Christopher Tinker, with Michael Frith at the organ.
Even better suited to their forces was Rutter's Requiem, which was accompanied by members of the Meridian Sinfonia: the oboe for The Lord's My Shepherd, with its exquisite soprano solo, and the mournful cello for Out of the Deep, which seemed somehow to resonate with the ancient stones of this historic Priory church.
A memorable, moving musical commemoration of those lost in war, and proof that the Stondon Singers' expertise extends far beyond the Renaissance polyphony for which they are best known.


The fighting man shall from the sun
Take warmth, and life from the glowing earth;
Speed with the light-foot winds to run,
And with the trees a newer birth;
And find, when fighting shall be done,
Great rest, and fullness after dearth.

Email ThisBlogThis!Share to TwitterShare to FacebookShare to Pinterest
Labels: blackmore, FOR THE FALLEN, stondon singers