Jim Hutchon went to the Cramphorn ... 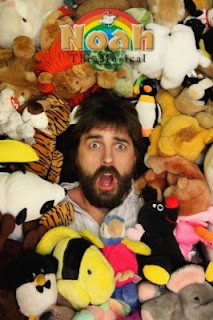 Susan Corina’s production of this short, snappy musical was done with verve and great energy with a cast that really believed in itself. The opening scenes were played in front of a giant backdrop of the Bible – a clever device to have the story spring from its pages – which was drawn back to unveil the big boat to climax the first act.

Key participants were a genial old Noah played by Pete Spilling, whose voice occasionally struggled against Ian Myer’s boisterous band, and an excellent, tuneful performance from Catherine Gregory as Mrs Noah. Barry Miles as Baasha the scornful senior elder was strong, and Deborah Anderson, as always, gave good value for money as Stella, the ‘Deus ex machina’ – a cross between God’s messenger and the narrator who kept the pace moving along.

I felt the use of modern dress was a mistake – flowing robes would have been nice - , and the storm scene could have been more visually dramatic. But all in all, this was a happy, joyous production which sent the audience out humming the dimensions of the Ark and with which Springers can be justly pleased.