Independent Ballet Wales at the Civic 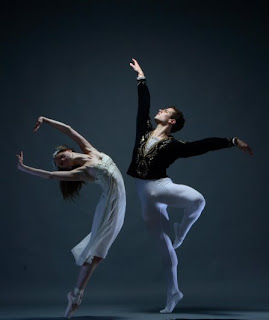 Like Tchaikovsky, Berlioz never intended his Romeo and Juliet music for the dance.

So while this wonderful score has the advantage of being both appropriate and unfamiliar, it does mean that the structures of traditional ballet music – themes, big numbers – are often missing.

But Darius James's choreography told the story clearly and engagingly, and his young dancers brought freshness and energy to the well-worn story.

The Berlioz, and occasional medieval French hurdy-gurdy music, were used precisely, in the dramatic final moments, for example, or the Act II pas de deux against the mezzo soloist.
The tender balcony scene was effectively lit, though Romeo was often left in the dappled shade of the orchard.

Romeo was danced with a youthful passion, sometimes gauche, always honest, and Juliet's candid, open movements were absolutely right for her character. In the smaller roles, we admired the lithe Benvolio, and the neat little nurse, whose every gesture spoke volumes.

The setting was simple but striking – hangings, ladders and, later, some telling back-projection to situate the action.

An imaginative, innovative production from a very impressive company, who are also touring Under Milk Wood this year.
on Tuesday, November 04, 2008