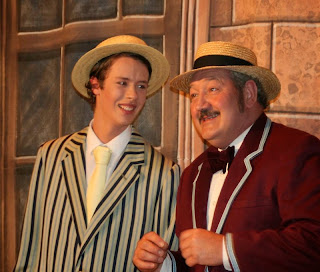 The Musical and Operetta Group at Ingatestone remains staunchly true to its traditions – G&S, Brigadoon, and this year, The Boy Friend and The Music Man.

Betty Moore's production was notable for some fine ensemble singing: the travelling salesmen and the town gossips both coped splendidly with their tricky numbers. The characterful barbershop quartet were excellent in their spoof numbers, especially Lida Rose, set against the lovely light operatic soprano of Mynne Johnson as Marian.

Allen Clark made a loveable old rogue of the con man who falls for the librarian, and Meryl Spinks was a feisty Mrs Paroo. Maurice Cole relished every syllable as the pompous mayor of River City.

This show needs young blood, too, and Ingatestone fielded some very promising talent, notably Miguel Martines de Aguino as sidekick Marcellus Washburn. His Act One duet with Hill was masterly, and he even brought zip and zing to the interminable Shipoopi.

Helene Moore's choreography was restrained but effective – I liked the deportment class and the book sequence in the library. Perhaps more could have been made of the final moments, where Winthrop comes into his own and the boys band scam becomes reality.

The real band in the pit, with the director at the helm, made a good fist of Meredith Wilson's score – a special mention for Amy Lincoln, who made one trombone do the work of seventy-six.
on Tuesday, November 04, 2008