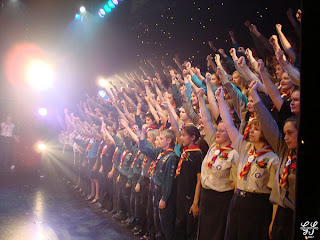 Inspired by the success of last year's Golden Show, the team of five, heaed by Producer Terry Simister, fielded a huge gang, filling the Civic Stage with [mostly] young people.

And if the military precision of yesteryear was nowhere in evidence, it was replaced by enthusiasm and some impressive concepts.

Cities, for instance, looked very good, and boasted some worthwhile songs, including a tricky Sondheim solo. The Sound of Music medley could only benefit from the inclusion of two engaging pantomime animals, and the School's Out sequence survived on sheer numbers alone.

The nineteen-strong mini-gang gave us a bizarre tale of skulduggery and tiddlywinks: too long, but it did have an excellent Sherlock Holmes with his “lemon entry” puns, and a rare revival of The Laughing Policeman. More nostalgia with some less familiar Ralph Reader numbers, the obligatory cross-dressing in I Feel Like A Woman, and creaky sketches, though I liked the laconic yokels reading the Weekly News ...

Recorded music may be a permanent feature now, but I much prefer live performance, like the Take That anthems, beginning with a nice sibling duo.

If the Gang would like to improve one thing before next year [auditions this September] I might suggest learning to breathe ...