This is 1987. LP covers on the walls, polaroids in the foyer.

In a bog-standard comp somewhere north of Watford, idealistic drama teacher Geoff Nixon inspires the kids, irks his colleagues and infuriates the caretaker.

As tradition demands, CTW's lively production, directed by Jenny Almond and Catherine Kenton, uses just three actors – the leavers putting on a final show – but fills the stage [and the auditorium in this free-ranging production] with a host of characters and caricatures.

So the laddish Salty [Adam Hitchin] was also Nixon and notorious handful Oggy Moxon; Gail [Sarah Bell] was a lost child, the pathetic Miss Withams, who has a doctorate but no discipline, and the nubile Miss Prime, [P.E.]. Jane Fielding was the booming Mrs Perry, producing her fifth Mikado, as well as Oggy on occasions, and the bitter tartar Basford.

Oggy in the car, Mrs Perry's curtain speech, the school disco, the brief encounter with the people from the posh school up the road, were all marvellously effective.

We might have liked a little more pace, more emphasis on the asides, but the quick changes of voice and body language, the physical style, the poignant low-key ending were all very impressive. And the issues in the play – funding, parental choice, the status of teachers – are still as relevant as they were twenty years ago, the last time there was a national strike in the profession ... 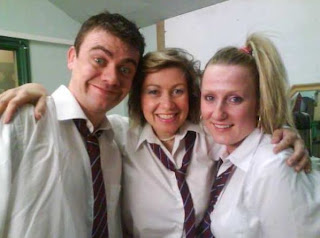