Young Gen at the Cramphorn 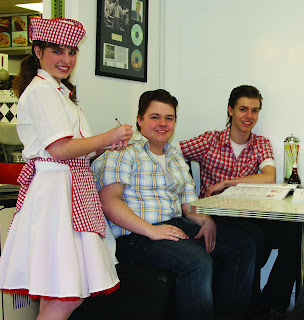 The set oozes style, a fantastic Fifties diner with a juke box, two trash cans, and the band at the back, under the neon sign of Smokey Joe's.

Jeremy Tustin's sure-footed production of this unique show did not disappoint. Number after number leapt to life on this tiny stage – Young Blood, Searchin', Fools Fall in Love, this last faultlessly delivered by Constance Lawton, and poignantly reprised in Act Two. Jessica Broad gave several memorable performances, including two masterclasses: teaching Bart Lambert to Shimmy and learning how to be evil from Rhiannon Heap.

Rhiannon was powerful in Don Juan, and Bart delivered a knockout Jailhouse Rock.

Joe Toland, who spent much of the show on the floor, used his gift for comedy in Shopping for Clothes, and D W Washburn, but he also shone in the oft-recorded I Who Have Nothing, shaping the emotions of the song with sensitivity.

But this was very much a company show. The raw energy of Rock & Roll, the multi-tasking girls in I'm A Woman, the wide-eyed innocents in Little Egypt, with Kevin Jarvis, the constant interaction in Loving You [ably fronted by Sam Pridige], Sam Toland and everyone in the finale Stand By Me. The dancing was sharp and amusing, stopping just short of pastiche. The diction was excellent [we were hearing some of these lyrics clearly for the first time ever !]. And those evocative harmonies were very impressively recreated. A couple of weeks ago, back at Meteor Way, I was impressed with the style of the production, and if I'm honest, the unamplified voices with just the piano had a simple charm slightly lost in the glitz and gloss of the Cramphorn and its powerful sound system. The MD was Bryan Cass, his five-piece band featuring Rob Downing's evocative sax.

Young Gen are celebrating 40 years on stage, and what better show than this superbly performed feast of affectionately parodied musical nostalgia. “Just thought I'd take one more look / And recall when we were all / In the neighborhood ..”

When I did take another look, on Saturday afternoon, I found the show as lively and polished as ever, though one or two voices were showing signs of strain. The sound was more immediate from the front of the auditorium, which I preferred. I've made one or two additions and amendments to the review, but congratulations to all - we look forward to moving from the Neighborhood to 42nd Street...