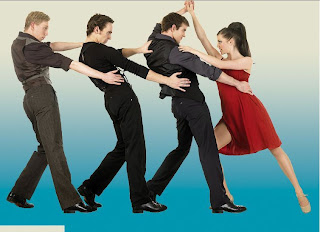 Eleven pieces in an hour and a half, showcasing the excitingly varied repertoire of the Central School's graduate company in this its 25th year.

They began with the almost austere classicism of David Nixon's Steps to Bach, danced to the Double Violin Concerto, with commendable coordination between the two couples. And ended with the live music of Philip Feeney for Sara Matthews' evocative Silver Light on Water.

In between, there were chunks of Tchaikovsky, crowd pleasers all, including the streetwise but more than slightly silly Cygnets of Matthew Bourne's famous all-male version of Swan Lake, and a beautifully costumed - but otherwise unsatisfying - Waltz of the Flowers, featuring Narissa Course, and two men in evening dress, Daniel Smith and Shenfield dancer Ruan Crighton, who'll join the Slovakian National Ballet in September.

Modern work was impressive in its variety: a revival of a moving pas de deux from Christopher Gable's Cinderella, jazz dance in Do You Want To, featuring Elizabeth Peach as the lady in red, a beautifully stylised Capriol Suite, which, like Warlock's music, was a modern take on ancient dance forms, and Sophie Allen dancing a poignant Pity of War piece to Samuel Barber and the poetry of Wilfred Owen, again choreographed by Sara Matthews, Assistant Director at the Central School.

Move him into the sun -
Gently its touch awoke him once,
At home, whispering of fields unsown.
Always it woke him, even in France,
Until this morning and this snow.
If anything might rouse him now
The kind old sun will know.

Think how it wakes the seeds -
Woke, once, the clays of a cold star.
Are limbs so dear-achieved, are sides
Full-nerved, - still warm, - too hard to stir?
Was it for this the clay grew tall?
- O what made fatuous sunbeams toil
To break earth's sleep at all?