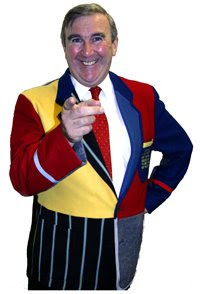 AN EVENING WITH GERVASE PHINN

At the start of his media career, Gervase Phinn finds himself seated between Miss Read and James Herriott. Which neatly defines his niche in the cosy world of fictionalised autobiography.

Dr Phinn is working on his latest memoir – early childhood in Rotherham - and he shares moments from those days, swimming, as he says, in an ocean of language, his dad reciting the Lion and Albert and The Green Eye of the Yellow God. He has a rich store of anecdotes, some of them as colourfully embroidered as the fanciest of waistcoats, from his 38 years in the education trade. He is excellent at timing a punchline, and impersonating a character – Tracy and Benedict, the foreman at Mother's Pride, the cast of countless Nativity plays.

Names feature strongly – he was grateful to be baptised Gervase – Adrian Wall and Dwayne Pipe just two of the genuine monikers on the class register.

It's ten years now since this superb raconteur was launched onto the showbiz treadmill [by Esther Rantzen], and clearly the lure of the greasepaint is very strong – he gives talks about spelling on cruise ships, signs his CDs in the bar after the show, even bookends his gig with Ken Dodd-style warbling.

But his unique blend of nostalgia and farce, sentiment and Seneca, certainly makes an enjoyable evening, and, I'm told, could have filled the Civic twice over.