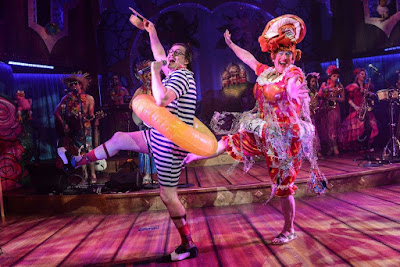 SINBAD THE SAILOR
at the New Wolsey Theatre, Ipswich


All the traditional ingredients of the Wolsey's wonderful rock'n'roll offerings are there: the actor/musicians, the chorus of cute critters, the visual puns [“pulled pork”] and the sound effects.
And after last Christmas's Sword in the Stone, this year we're treated to another fresh new storyline, and some unexpected characters. Our story-teller, and good fairy, is Scheherazade [Elizabeth Rowe], who brings the three couples to her love shack for the wedding finale. Our hero is Sinbad, of course, a likeable Steve Rushton, who woos the Princess Pearl [Daniella Piper]. His rival for her hand is the evil Sinistro, played by Wolsey favourite Dan de Cruz. He gets to quote Lear for his storm scene, which also has one of the best numbers, Deep Purple's Smoke on the Water. Much of the music is from the 70s and 80s: one of the most successful is the hilariously subverted Living on a Prayer, complete with smoke machine and fan supplied by a nimble stage-hand. Possibly a thinly disguised Graham Kent, who gives us a brawny Dame Donna. His stooge, Tinbad the Tailor, was very amusing done by Rob Falconer.
Half the fun for the grown-ups in the audience is seeing everyone slickly swapping instruments: the Dame on trumpet, the three girls a great saxophone trio, and almost everyone behind the drum kit at some point. The direction – Peter Rowe, who penned the witty, naughty script – is lively and energetic. The ten-strong company seem genuinely to be having a good time – though come the end of January that might be hard to sustain – Sinbad's Saucy Sausage sails on at the Wolsey until the 28th.
production photograph: Robert Day
on Thursday, December 01, 2016

AMAZING, best panto ever! Thanks so much! It was so funny! Living on the Prayer was defiantly the best song the staging was hilarious with the stage hand!