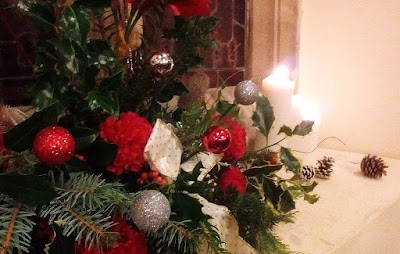 The Stondon Singers at the Priory Church, Blackmore
20.12.16


The passing of another year is marked by this annual Christmas treat; as so often, the last of the carol concerts in the calendar.
The Singers, conducted by Christopher Tinker, began with the fifteenth century simplicity of Busnois' Noel, Noel, Noel, written when the Augustinian priory here was at its most prosperous, and ended with an equally simple, equally moving My Lord Has Come, written in 2010 by Durham composer Will Todd.
Loyset Pieton, of whom little is known, worked in Dijon at the start of his sixteenth century career; his O Beata Infantia was a wonderful discovery. Other highlights of a varied programme were Alan Bullard's Shepherds, Guarding Your Flocks, premièred here a year ago, Malcolm Archer's A Little Child There Is Yborn, with its haunting Alleluias, a nimble arrangement by Mark Wilberg of Ding Dong Merrily, and the sweet harmonies of Gabriel Jackson's lilting Christ-child. Michael Frith was the accompanist at the organ.
The capacity crowd got a chance to sing, too, and after a rousing O Come All Ye Faithful, the Stondon's traditional Christmas encore, an a cappella Silent Night from the west end of the nave.
As Nick Alston pointed out in his introduction, a choir is not just for Christmas, and the Stondon Singers' busy diary for 2017 includes a Marian anthology in Queen of Heaven, Evensong in St Paul's Cathedral, and the eagerly awaited William Byrd Anniversary in Stondon Massey.

William Todd - My Lord has come  from , A Christmas Eucharist from Bath Abbey, 25th December 2015. directed by Peter King