THROUGH THE LOOKING GLASS 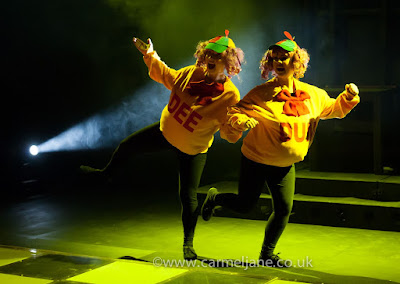 THROUGH THE LOOKING GLASS

Bill Francoeur was a prolific writer of musicals for the youth and amateur market in the U.S.
His free and easy adaptation, with James DeVita, of Lewis Carroll might raise a purist eyebrow or two, but the children in the audience, who probably know the ball park better than the chess board, were royally entertained for the full 90 minutes.
The transatlantic twist seemed to work best when it was most radical: the Wonderland Gamesters, or a country star Humpty Dumpty [an excellent Elliot Burton, who also gave us the White Rabbit and a talking flower]. Tweedledum and Tweedledee, tiny propellers on their schoolboy caps, also captured the wacky style well [Libby Grant and Laura Hawkyard].
Sophie Farquhar was a sweetly bemused Alice, pert and assertive with her rival Queens [Katie Lawrence and Lydia Shaw]. Olivia Sewell and Scott Westoby were pawns, and between them played eight other roles, from Tiger-Lily to a Dixie Chicken – one of Dumpty's backing dancers.
Technically the production – directed by Ray Howes with set design by David Zelly – was a triumph. A chandelier, red and white chessmen, and centre stage, a superb under-lit chess board on which Alice moves towards the eighth square. Some impressive production numbers too [choreographer James Sinclair] – the aforementioned Dixie Chickens, the baseball game, the ultra-violet ballet [always a panto favourite] and the gospel choir for “You Got Responsibility” using the whole space and the mirror ball !

Email ThisBlogThis!Share to TwitterShare to FacebookShare to Pinterest
Labels: brentwood theatre, through the looking glass

Precise , committed and enthusiastic acting , technical genius and great scenery combine in this exciting thought-provoking and fast-paced show . Well worth seeing once , or even twice !