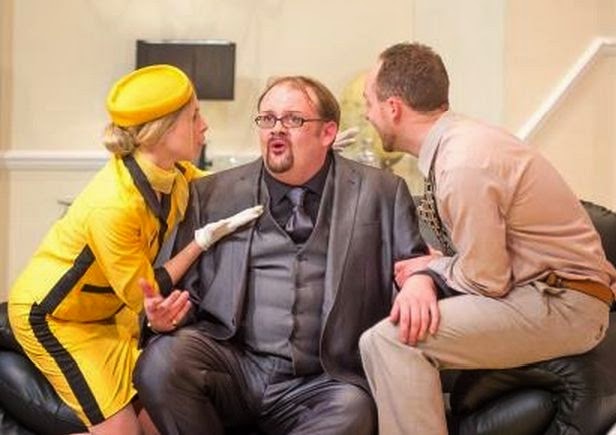 BOEING! BOEING!
Cut to the Chase at the Queen's Theatre Hornchurch
12.03.2015
for The Public Reviews

Back in the Swinging Sixties, this groovy French farce – kilometres away from Feydeau – was a hit not only at home on the boulevards, but in Beverley Cross's English version, on Shaftesbury Avenue and Broadway.

Cut to the Chase have a formidable track record in classic farce, and this naughty-but-nice door-slammer is done with some style by a talented and energetic acting company.

Fred Broom, who delighted audiences in last year's Lend Me A Tenor in this house, is perhaps an unlikely Lothario. His Parisian polygamist, running his love life with his little black book and his airline timetable, is a bit of a slow burn, but by the time things hot up in Act Two his verge-of-a-panic-attack antics keep the audience amused. A nice contrast with the much more manic approach of his old friend from Aix, done with a Scottish burr and excellent, athletic physical comedy by Tom Cornish. Dropping his trousers, deftly catching the fainting domestic, finally getting his own Air Caledonia flight bag.

Megan Leigh Mason makes the most of Bertha, the bonne a tout faire who faithfully changes the photographs and the menu to match the mistress of the moment. Her long-suffering cynicism is very well caught­ - “I'm a cheerful soul at heart” - and she gets some of the best laughs with her impeccably timed delivery.

The Sixties – when Orly was still Paris's main airport – are strongly evoked in Norman Coates' marvellous set, with its abstract works of art and its seven doors, including a pink bistro-style door for Bertha's kitchen. Before the show, a video collage – Johnny Halliday, cute cartoon girls on the doors – and a soundtrack of Gallic pop, including the Gainsbourg hit Laisse Tomber Les Filles – Give The Girls A Rest – advice that the exhausted Bernard finally seems to take to heart … The French connection is less evident elsewhere, though, with little attempt at Parisian chic or charm.