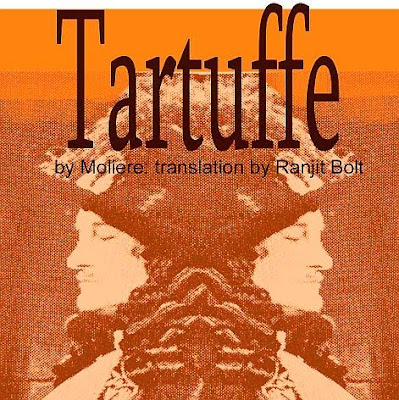 
Marjorie Dunn's magnificent production had elegant furniture, suspended screens and serious wigs.
Ranjit Bolt's cleverly colloquial verse translation needs careful work to avoid plodding pantomime delivery, and not everyone was as successful in this as Glenda Abbott's pert maid Dorine, or Robert Bastian's dupe Orgon. John Mabey was a convincing son of Orgon, who sees through the “censorious fraud” of the title, nicely played by Alan Ablewhite, in a monk's habit, for some reason.
Much of the play is static, relying on the words and the intrigue, but I liked the scene changes done as a kind of ballet, to Lully, I presume. Martin Goldstone also spoke the Deus ex Machina at the end very stylishly; good to have voices such as his, and Brian Terry's [Loyal], in these small but vital roles.


Marjorie Dunn’s joyous production of Moliere’s 17th Century comedy was full of wit and style, and carried the jokes and clever language down the intervening 346 years untarnished (with some help from translator Ranjit Bolt). There was much invention and strong characterisation from all of the committed cast, who, after slightly shaky beginnings, handled the rather strict rhymes and rhythms with a natural air.


Based on the (then) risky assertion that much of religion is crooked, the key fraud (Tartuffe) was Alan Ablewhite, totally convincing as an unctuous monk inserting himself by degrees into the affections of the weak head of a rich family. Robert Bastian was that head, though I felt he could have toned down his very powerful performance for one a little more hesitant and deluded. As a Jeeves-like servant with a wide range of voices, Glenda Abbott was masterful in her scheming to rescue the family from their own folly. The seduction scene on a table-top between the wife of the house (delicately played by Meryl Spinks) and the monk, where she endeavours to reveal to her husband the monk’s true intentions, was genuinely memorable – especially when the husband was under the table!
Ray Howes’ very stylish set relied on hanging frames of gauze and a few sticks of furniture, and the costumes and wigs were completely in character for the period. Scene changing was done in a balletic fashion by Chrissie O’Connor and Martin Goldstone. This was a rare evening of real enjoyment for the near full house at Brentwood Theatre.
Jim Hutchon
on Sunday, March 28, 2010