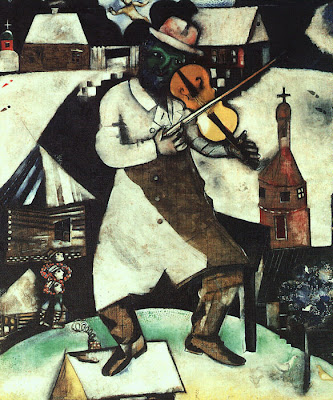 FIDDLER ON THE ROOF
CAODS at the Civic Theatre
27.02.10
It's nearly half a century since the ethnic cleansing musical started its record Broadway run. Nearly forty years since Ray Jeffery directed the first of his 46 Fiddlers.
For CAODS' 90th anniversary he's returned to the show, using the expanse of the Civic Stage, just a toy-town Anatevka in the background, for a production that looked as wonderful as it sounded.
From the long line of Tradition to the final diaspora, the slightly dated show gave us a series of stage pictures, notably the candle-lit Caravaggio of the Sabbath Prayer.
Stuart Woolner, MD for the first time for CAODS, produced some impressive choral singing, supported by a fine band, starring fiddle, accordion and klezmer clarinet.
A huge cast included veterans and youngsters – Tevye's sweet-voiced daughters were brilliant in Matchmaker. 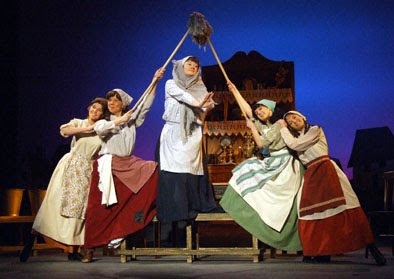 Yente herself was played with great strength of character by Angela Broad, and I liked Sean Quigley as Perchick, the radical who thinks that girls are people too. 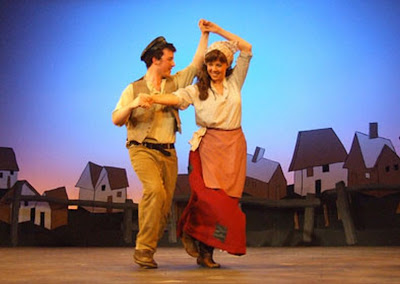 Daryl Kane was a warm, expansive Tevye with a voice to match, his long-suffering Golde Lynette Sullivan. And the nimble Fiddler was Siemona Kingsley.
I could easily mention dozens more: faces who fitted the period and the places, telling cameos, strong characters. But this was very much a company piece, with CAODS at the top of their game. A great start to the celebrations which continue in September with Beauty and the Beast.
on Monday, March 01, 2010

Email ThisBlogThis!Share to TwitterShare to FacebookShare to Pinterest
Labels: caods, Civic Theatre, fiddler on the roof