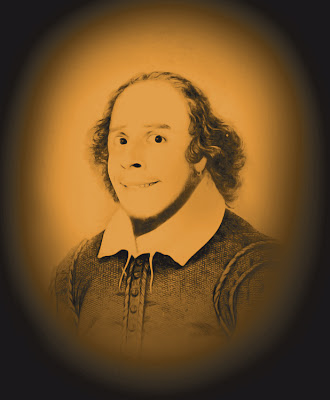 RUSSELL KANE'S FAKESPEARE
at the Cramphorn Theatre
27.02.10
Is it post-modern, Miranda ?
Search me, squire. Chippy, sweary, edgy, Russell Kane has a love-hate relationship with his native Essex, its accent and its pikeys. His cod Shakespearean tragedy has a banker as King Nigel, its hero, a P.A. Donna, as his Billericay Mistress Quickly. It applies blank verse to his Essex existence, in a torrent of bawdy wit and celebrity similes.
As he said in his stand-up warm-up, its the dangerous clash of chaviness and Penguin Classics.
I think the Bard would have applauded his quick-fire word play: “Tis an inconvenient truth – Gore me not in it.” And would happily have penned some of the lines: “Who disturbs the ferryman's work ?” “Purse my lips !” And there were many laugh-aloud conceits: the “lazy plot-advancing scroll”, his wife “my orange Rayleigh sow”.
We might grow weary of the dropped low-culture names, and despite the talk of syntax, the grammar was not a patch on the scansion.
Kane's partner in crime was Sadie Hasler, an Ophelia babbling 80's Sinitta, excellent in her Essex soliloquies.
on Monday, March 01, 2010