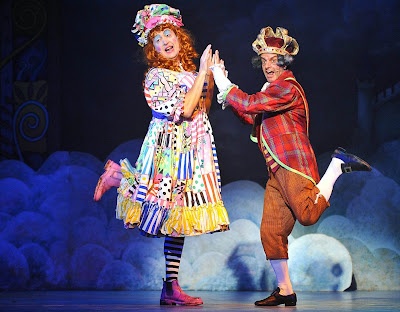 JACK AND THE BEANSTALK
One From The Heart at the Civic Theatre Chelmsford
05.12.09
Fast, furious and fortissimo, this year's Civic Panto is a successful blend of the traditional and the modern.
So we have Ample Bottom village green [complete with “smiley yet strangely mute villagers”], a dynamic, down-to-earth Northern dame [Oliver Beamish], a classic ghost routine, and even rubber chickens. But also jokes about swine flu and, endlessly, bankers' bonuses and MPs' expenses – Philip Cox was the errant King. The youngsters – Ellie Baker's Jill, Richard Vincent her fresh-faced, “hopelessly romantic” Jack and Nathan Guy's tireless Silly Billy – had some lively disco classic production numbers [M People's The Hero Inside], well supported by a skilful juvenile chorus. And excellent East End villain Fleshcreep [Mark Jardine] got to do a Michael Jackson tribute. There was even a Megamix finale after the walk-down ! 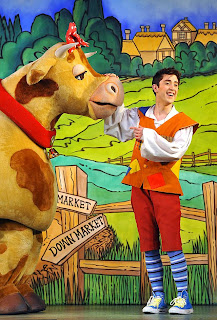 Daisy the Cow and the Giant were both well conceived, constructed and operated, and the whole production – written and directed by Simon Aylin – looked colourful and fresh. Ben Kennedy was in charge of the music.
on Monday, December 07, 2009