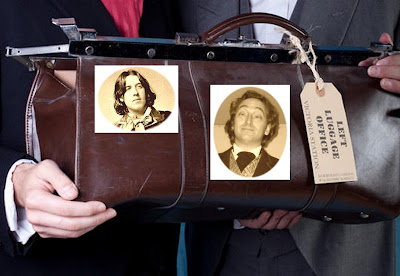 THE IMPORTANCE OF BEING EARNEST
CTW at the Old Court
09.12.09
It was Miss Prism, over a festive hock and seltzer, who first voiced our thoughts. Algernon's a dead ringer for Oscar, natural curls and all.
One of many delights in Mark Preston's Importance, playing at the Old Court this festive season. 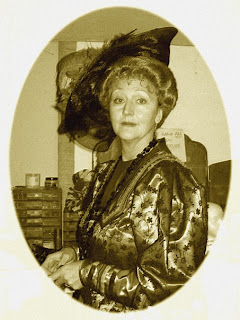 Some aunts are tall, as we know, and Christine Davidson's acidly aloof Lady Bracknell was excellent, especially in her moments of strong silent stillness. Kat Tokley, too, as her equally statuesque daughter, caught the stilted style nicely, an effective contrast with Stephanie Price's sunny Cecily.
The idle Jack and Algie [Dean Hempstead and Barrie Taylor] worked well together, wit and sarcasm embedded into their most trivial remarks. The proposal of marriage was very amusingly done.
The remainder of the ménage comprised a lively Prism [Helen Bence] and a splendid Chasuble [Peter Nerreter]. And below stairs, Mike Nower's urbane Lane and Ivor Jeavons' doddery Merriman, assisted by Stage Manager Emma Moriaty as an unnamed maid.
Maybe we could have had a little more pointed emphasis for the epigrams, crisper heightened RP, and a less austere Half Moon Street. But the heart of the play, and its undying appeal, were well served by this careful revival.
Jim Hutchon was at the first night for the Chelmsford Weekly News
Director Mark Preston has given Wilde’s evergreen satire on Victorian pomp a fresh coat of paint, while sticking closely to original Victorian theatre values. The freshness is due largely to a talented cast which work well together, especially the two ‘Earnests’ who kept up an effortless mild antagonism towards each other. Dean Hempstead played Jack Worthing with a clipped pomposity, which rather belied his indolent existence, while Barry Taylor, as Algernon, revelled in his pointless life but could, perhaps, have employed Wilde’s languid approach to greater effect. The pair of airheads upon which they focus their affections – the versatile Kat Tokley as Gwendolen and Stephanie Price as Cecily - both gave thoughtful and convincing performances well beyond the remits of their respective characters.
Key to the action is the formidable Lady Bracknell, played by Christine Davidson, who started off rather gently I felt, though soon hit her stride as the uncompromising monster she really is. Her ‘hand-bag’ was refreshingly understated. Plaudits too, must go to the excellent pairing of Helen Bence as the hapless governess who leaves the baby in the hand-bag, and Peter Nerreter as the epitome of the concerned but vague country vicar. For me, the pairing that really captures the essence of Wilde’s parody are the two butlers, Mike Nower as a perfectly executed Jeeves and Ivor Jevons as the crinkly old retainer.
The sets were well designed and functional with good solid doors – rare for amateur productions - and the costumes, by Bernice Cramphorn, were sumptuous and accurate. As is becoming customary for some CTW productions, ‘Earnest’ will run over two successive weeks, so can still be caught on 16th to 19th December – ideal Christmas fare!
thanks to Tonio Ellis for the photographs !
on Monday, December 14, 2009