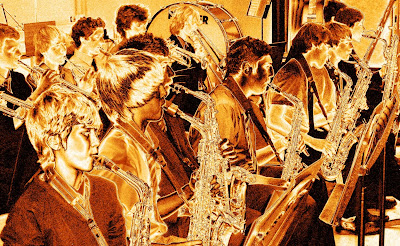 CHARITY ORCHESTRAL CONCERT
King Edward VI School
03.12.09
Despite modest forces, Shostakovich's exuberant Festive Overture was a highlight of the evening. Brilliant brass and woodwind, and a sterling effort from the strings, including just four hard-working cellists.
More challenges for the Senior Orchestra, led by Sasha Millwood, in Liszt's Les Préludes, with some nice little woodwind solos, too.
The Chamber Ensemble chose Britten's Simple Symphony, written with amateurs in mind – the Sentimental Serenade was beautifully shaped, I thought. And the Junior Orchestra, led by Brian Chan, achieved a real Viennese lilt in the Thunder and Lightning Polka, and also featured, in Jerry Brubaker's Piano Concerto, aka Chopstix Variations, a mystery guest soloist: waltz, rumba, rock – he mastered all the genres and played all the right notes, presumably in the right order … 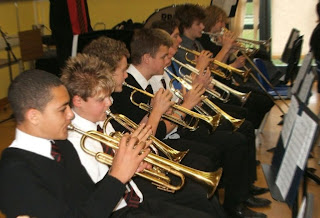 The enormous wind band – 60 plus musicians, led by Subin Lim – were impressive in Eric Whitacre's Sleep, with elegant horn playing, and achieved an authentic show-band style in a medley from Jersey Boys, the karaoke musical about The Four Seasons.
All these ensembles were conducted by KEGS Director of Music Tim Worrall.
The Chamber Choir, directed by Oliver El-Holiby and Will Waine, produced an amazingly sophisticated sound in an antiphonal Britten piece, Cole Porter, and Rutter's moving arrangement of Steal Away.
on Monday, December 07, 2009