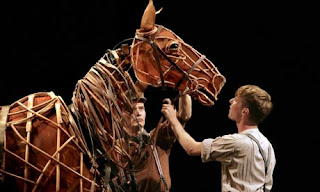 WAR HORSE
Olivier
31.12.o8
Back to the National for a second look at War Horse, based on Morpurgo's novel.

Some tweaking since last year – the French girl is no longer a puppet, the naïve hand-held ombres chinoises have been replaced by more sophisticated projection, and Major Nicholls no longer reappears as a “ghost”, but the breathtakingly lifelike Joey and Topthorn are as good as ever, and John Tams 's music is in the excellent hands of folk singerTim van Eyken .

The human cast struggle to match the impact of the equine performers. But Patrick O'Kane as the “good German” Muller was outstanding, Bronagh Gallagher was a convincing wife and mother, and Kit Harington had some moving moments as the boy Albert. Not forgetting, of course, Finn Caldwell's scene-stealing goose.

This superb production, directed by Marianne Elliott and Tom Morris, combining a huge cast with masterly lighting and brilliant music, remains a worthy successor to His Dark Materials and Coram Boy. A South Bank sell-out for two seasons, it transfers at the end of March to the New London in Drury Lane. 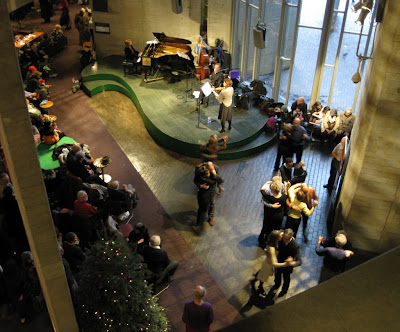