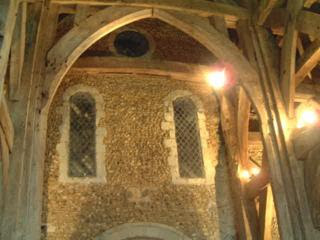 In the atmospheric setting of the Priory Church in Blackmore, the Stondon Singers began their Celebration with a 16th century German Resonet in Laudibus. By Leonhard Paminger, a composer unknown to me, and many others, I guess. Turns out he was Austrian, Protestant and a friend of Luther.

This rare gem is typical of the Stondons' style. Their carefully constructed programme – Anticipation, Nativity, Visitors to the Stable – was a satisfying mix of old and new, familiar and less familiar. So a robustly scored gallery carol from Dorset followed a brand new setting – by the Singers' founding-father Frank Webb – of The Ox He Openeth Wide The Door.

This excellent choir goes back 40 years, and they specialize in older repertoire, notably “local boy” William Byrd, who was represented here in a Vigilate and and the Magi's Vidimus Stellam.

King's Men Ord and Willcocks, Pearsall's In Dulci Jubilo, Mathias' Sir Christemas: these were the familiar pieces, and of course there were congregational carols for us all to sing.

Guest conductor, getting the very best from his singers, was Stephen Lloyd, who introduced the music with an engaging blend of erudition and mischief, and the organist was Stephen King, who gave us an impressive romantic Fantasia on Veni Emmanuel, the carol we had just sung ...