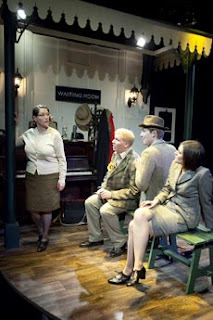 Recession-busting drama at the Sir John Mills this year, with no less than five for the price of one.

On lonely Hadesworth station, four travellers and the sinister station master are stranded. They decide to tell their spooky stories to pass the night ...

Julian Herries' 2008 offering is well up to the high standard set in previous years, with another set of catchy songs from Pat Whymark. Endlessly inventive – the funny names, the twists of the plot – with the gleeful double entendres, the breakneck pace and the lightning changes, and the use of effective minimal detail – just the carriage door, just the handlebars, just a few horses from the carousel. And the faultlessly structured storyline, character and in-jokes. The creepy cannibals twins were especially memorable. Come to think of it, this is the third show this Christmas where children were killed for food - Hansel und Gretel, Saint Nicolas and now Lavinia's story ...

Hard to isolate elements for particular praise, but the palm-tree business was comedy perfection, and Ankh-er-Saweh's dog managed to sustain a routine well past its best-before date and into the audience sing-along.

With a wicked glint in his eye, Julian led an enthusiastic cast of five, playing Lord Floppington, Tootes and Gunter Lunchfarter, to silly name just three. Louise Shuttleworth was Madame Chambourcy, Tracy Elster Lady Wetsam-Daly, Nicholas Agnew Sister Bridget [and the dog] and Simon Nock Mr Crackers the children's entertainer/escaped lunatic. And, in the unique spirit of Eastern Angles, everyone pitched in to play an instrument – coconuts and triangle obbligato – shift the props and work the audience. Pure theatrical magic, playing in Ipswich and Woodbridge till January 24th.