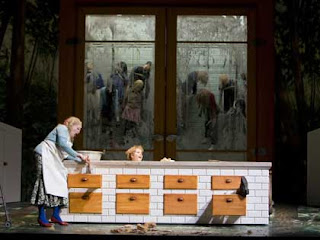 Hand jive and high fives – these seemed a very contemporary pair of kids, even more than the costume and set would suggest. The DDR sprang to mind, though the father remains an artisan, even if his brooms were clearly not traditional, and his shopping from Spar pointed to a contemporary, almost affluent, society.

This new production, by Moshe Leiser and Patrice Caurier, ditched much of the magic for the grotesque, the kitsch and the glitzy. The dream sequence, with its traumeichhörnchenengel creatures, was strangely effective though, with the Sandman’s sandwich the longed-for gift. 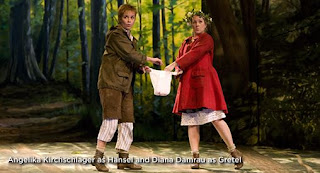 The children were excellently sung by Kirschlager and Damrau, with plenty of lively characterization, and the Witch was a welcome appearance by Anja Silja, whose scary soprano probably didn’t need gimmicks like the boobs and the Zimmer frame – and why wasn’t that turned to barley-sugar, I wonder ?

Another legend as the Father, Thomas Allen in good voice, even when drunk and frisky on the bed with Elizabeth Connell as a depressed Mother.

The music, under the loving baton of Colin Davis, survived this wayward, cheap-looking makeover unscathed, though it still puzzles me why the notes, and indeed the words, are sacrosanct, but directors feel the need to impose their world-view on the audience, many of them in this case youngsters seeing their first ever opera. It's no secret that E H wrote the earliest version of this opera to entertain his own children. And yet the directors are on record as saying that this is not entertainment, and it is not for children, but about them ... 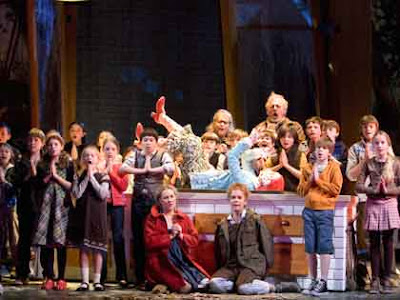