THE STRANGE UNDOING OF PRUDENCIA HART 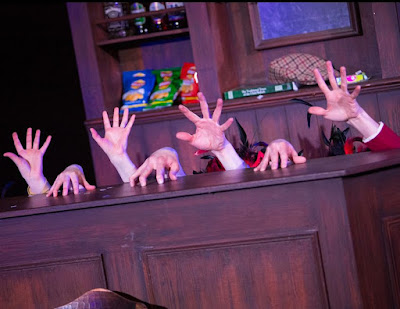 THE STRANGE UNDOING OF PRUDENCIA HART
Eastern Angles at the Public Hall, Witham
31.03.2017

Eastern Angles are venturing further afield again. Last year's Cornish excursion was something of a disappointment, but this Scottish piece is a much more satisfying entertainment.
It has all the elements of an Eastern Angles production: a small company of actor-musicians, and a story firmly rooted in the region. Which in this case is the Scottish borders. A Kelso pub hosts a folk night, with four musicians – fiddles and guitars – warming us up with Rabbie Burns. Then the lights go down, and the story-telling starts, with the four performers changing character and swapping rhyming couplets, with some deliciously ingenious rhymes. The ballad form is central here. Our heroine [Hanna Howie] is an academic, specialising in “folk studies” and “the topography of Hell” - not so much Dante as Dennis Wheatley.
There's fun to be had as she speaks at a pretentious conference. Her nemesis, Colin [Robin Hemmings] first appears on his motor-bike, brilliantly brought to life with lights, a helmet and a noisy kazoo. Then it's off to the pub, the Devil's ceilidh, a snow-bound lock-in on Midwinter Eve, an encounter with a woman [Elspeth Turner] and her children under a sodium street-lamp, and Prudencia's first meeting with Nick [Simon Donaldson] from Goodman's Field, who has a warm fire waiting for her …
After a cliff-hanging interval the darker second half is mostly a two hander, set in Nick's B&B, where Prudencia spends an eternity cataloguing his library and watching the weeds grow in the Asda car park outside. The other two actors providing the atmospheric underscore.
There is a happy ending, though; redemption in rhyme, love requited, the damsel rescued by Colin, who's been holding a torch for her all along.
David Greig's piece is certainly strange, veering from satire to suspense to sentiment. Despite the occasional longueur – the grotesque karaoke - Hal Chambers' direction keeps us enthralled: the puppet children, the dream dance, the many mutations of tug-of-war Prudencia.
The original National Theatre of Scotland production was designed to be performed in pubs. The folk club intimacy was sometimes hard to re-create in the Public Hall, despite their excellent bar and some cabaret-style tables. But the music is excellent - not just folk, but Katy Perry for the karaoke, the Devil's Kylie [“Can't Get You Out Of My Head”] for the finale.

The production tours round the region's village halls until the end of May; if I could choose, I'd probably plump for Isaac's on the Quay back in Ipswich, a genuine music venue with just the right ambience.