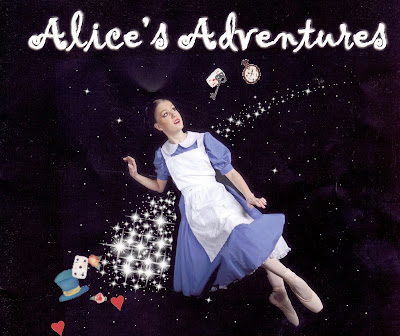 Lewis Carroll's fantasy begs to be given the dance treatment. Recently we've seen Christopher Wheeldon's hit show for the Royal Ballet, and before that there was the English National Ballet's version, with music arranged by Carl Davis.
Annette Potter has taken this hooked-on-Tchaikovsky score, but otherwise this beautiful ballet is all her own work. And full of colourful detail and imaginative, inventive ideas.
Not least the ingenious prologue, set in a park, where, in the waking world, we meet the characters who will be transformed in Alice's fevered dreams. In Hatter's café, [muffins and sorbets], the proprietor wields his huge red tea-pot – he'll be the Mad Hatter. A tail-coated white-faced mime [a businessman, according to the cast list] is running late, but filches carrots from a street trader – he'll be back as the White Rabbit. A sleepy urchin curls up on a bench – the Dormouse. And Alice and her sister give a glimpse of the impressive dancing to come.
A stunning digital animation takes Alice down the rabbit hole, to grow and shrink, back-stroke through the pool of tears and organize the caucus race.
This is a ballet crammed with memorable characters: Andrew Potter's mercurial, mischievous Mad Hatter, Isabelle Fellows' delightful Dormouse, an evil Queen from Samantha Ellis, and great character dancing from Megan Roberts and Alice Brecknell as the Tweedle twins. Darci Willsher makes a very human Alice, often sad, frequently frustrated; her dancing is enchanting – there are no extended romantic pas-de-deux here, but she does have some lovely moments with her White Rabbit [a riveting Andrei Teodor Iliescu], who loyally supports her through her trials.
There is plenty to please the fan of classical dance: the six Tears, the Bluebells and the Roses in the Garden of Living Flowers, and in the courtroom scene, a traditional sequence of divertissements featuring all the characters Alice meets on her progress through Wonderland and the Looking-Glass World. And plenty of scope for the corps de ballet to shine: schoolgirls, playing cards, hedgehogs and flamingos, not to mention the many-legged shimmering caterpillar, fronted by a sinuous Lucy Abbott.


All these fantastical flora and fauna need costumes, of course, and the clever, stylish designs [Ann Starling] make a huge contribution to the success of this ambitious new ballet.
on Friday, March 24, 2017