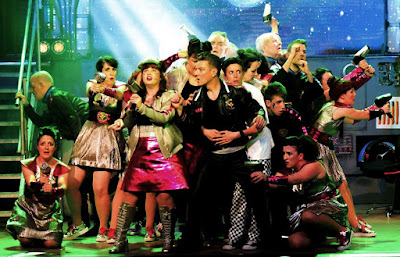 WAOS at the Public Hall, Witham

Shakespeare's forgotten rock and roll masterpiece takes to the Witham stage in a production packed with energy and attack.
On an impressively high-tech set – flashing lights and giant plasma screen - the company throw themselves whole-heartedly into this irreverent mash-up of the Complete Works and high-camp hits of the 50s and 60s.
Claire Carr's production is assured in every department. Technically, the lighting is superb, with striking Close Encounters silhouettes; the monster and the air-lock [smoke and fan] are both highly effective. Video and animation are beautifully done. Musically the familiar songs are given barnstorming performances, with spectacular choreography: Who's Sorry Now – with the Swinging Space Cats – and Mr Spaceman – with silver lamé cowboy hats – among the many memorable production numbers. The pit band, conducted from the keyboard by James Tovey, provide very authentic instrumental support; special mention for the powerhouse drumming of Paul Codling. And the acting matches the camp, OTT style of the music.
Captain Tempest – the heart-throb hero – is David Everest-Ring, striking poses and selling the songs. His Navigation Officer, on this equal opportunities spaceship, is an excellent Rhianna Howard. Diana Easton makes a wonderful Gloria, with commanding stage presence and a great way with her numbers – Go Now, especially. Cookie – the simple, homespun lovesick lad - is the seriously talented Harry Tunningley: dancing, singing and verse-speaking all very accomplished. His duets with the Bosun [Emma Loring] are tremendous fun. He does however have a body double from the band to accompany his air guitar, since this is a company of dancers rather than actor-musicians. The inhabitants of the isle of D'Illyria are Stewart Adkins' mad scientist Prospero, making the most of Lear's storm, Claire Rowe's delightful Miranda, and, as the rolling Coke can Ariel, Tim Clarke, resplendent in his costume and skilled on his roller skates. A nice cameo in the Patrick Moore video role of Newsreader from Richard Cowen, who's also a member of the polished ensemble.
Hugely enjoyable from the opening Wipeout to the Great Balls of Fire finale, this is a laudably virtuosic production of a demanding musical theatre classic.