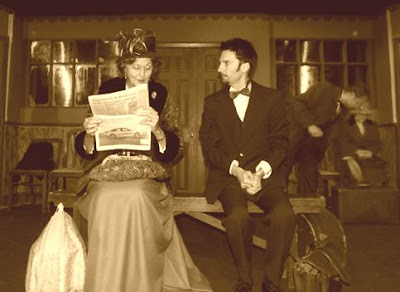 CTW at the Old Court Theatre

Opening the new CTW season, Arnold Ridley's museum piece, a nod, perhaps, to the “crowd-pleaser” season just past.
Good houses, though I suspect that Wednesday's audience was “a difficult crowd to entertain”. But a fine cast, directed by Iain Holding-Sutton, with Caroline Froy, made an excellent job of building suspense and maintaining the period style.
Ryan Read-Gaterell, for example, made a believable Charles, with Caroline Wright as his blushing bride. The character parts have the best of it, and we enjoyed Robin Winder's grumpy old station-master Saul, and Christine Davidson's imposing spinster, sitting in state behind The Times, and toppling hilariously off the wagon thanks to Teddie's handy hip-flask. This “idiot with the feather in his hat” was memorably done by Tonio Ellis, pushing the pace and pointing the laughs. And Jade Flack stood out in the smaller role of the madwoman who is not all she seems.
The spacious waiting room is convincingly reproduced, with pre-nationalization grime on the windows; unfortunately lighting angles caused annoying reflections once the action started. Ridley gave long explicit instructions for the steam train effects; nicely done at the Old Court, though a little more sound and a little more smoke would not have come amiss.
The brandy was still pre-war, but the contraband had now become narcotics rather than arms.
An impressive curtain call had the cast of twelve standing like commuters on a platform, as the ghost train roars through Fal Vale station one last time.
on Thursday, September 17, 2015