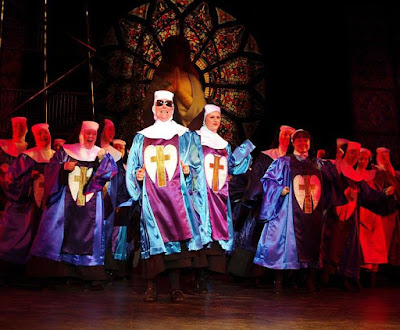 A spin-off from the movie, this rather shallow show is a real crowd-pleaser. One great anthem, a silly plot, and oodles of Catholic kitsch.
CAODS give it everything they've got, and the packed houses are going home very happy. Sallie Warrington's production has pace, pizazz and some very nifty choreography. And it uses a huge cast to excellent effect, with nuns filling the wide Civic stage, decked out with some splendid scenery – the monumental Queen of Angels, the stained glass, the last supper, not to mention the police station and the night club, trucked and flown by a hard-working crew.
Plenty of scope for broad-brush characterization amongst a talented company. Stephanie Yorke-Edwards is the enthusiastic chorister Sister Mary Patrick, Jessica Broad the perplexed young postulant Sister Mary Robert. John Cox plays the priest who enthusiastically embraces the sinful world of show-biz [“The reviews are in !!”]. Curtis, the gangster boyfriend, is done with heavy menace by Jonathan Davis; on the side of the angels, Sweaty Eddy, childhood sweetheart now neighbourhood cop, is Oli Budino, slickly switching between policeman and fantasy star in his big number. And the three stooges [Ian Gilbert, David Gillett and Ben Wilton] have a ball, especially in their priceless Lady In The Long Black Dress.
Deloris, the wannabe musician around whom the plot revolves, is given a great larger-than-life characterization by Tessa Kennedy, suggesting a singer with more self-belief than talent, but making the most of the show-stoppers she's given, and showing touching loyalty to her new-found sisters.
Not much subtlety in this show, but Helen Hedin manages to make the Mother Superior a wonderfully believable character, long-suffering, with flashes of caustic wit, she represents the forces of tradition who're not convinced that soul and disco – putting the Sis in Genesis – are the way forward for the church.
The 70s musical idiom – lovingly guyed in Alan Menken's score – is excellently re-created by MD Robert Wicks and an outstanding twelve-piece band.